Go Gaming launched Go Khiladi a fantasy cricket app with innovative games for cricket fans. The games are designed even for the common man to participate and play to win cash. The company has introduced the Free Khelo Cash Jeetho contest. 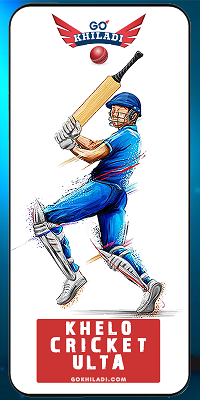 Go Khiladi will be a fantasy cricket app with some user-friendly features that sets it apart from the other players in the market. Modern-day cricket games are largely understood to be a batsman’s tournament, considering the conditions and pitches are batsman-friendly. Thus, users will want to load their teams with batsmen more than bowlers in their teams. Hence Go Khiladi created T6 (batting fantasy) to cater to the user’s imagination. In this, the user can just select six players and participate only in the batting part of the game.

Also, features like T3 Tournament Level Games and ULTA makes it distinctive. In T3 Tournament the user pays once and plays in the entire tournament by selecting three players and participates only in the batting part of the game. In a classic game, an individual wins if he creates the best team that scores the highest points. In ULTA the losing team becomes the winner which sets the motto – Lose to Win.

During the launch, Go Gaming Online vice president Rohit Vaddi,  commented, “For Indians, cricket is not only a sport, it is an emotion. We are strengthening that emotion through Go Khiladi. We are trying to bring our audience’s fantasy alive using their skill and love for the sport. I am hoping this Go Khiladi receives acknowledgement from the audience.”