Topics in the gaming session spanned across a gamut of issues that have been hounding the gaming industry, particularly in India. 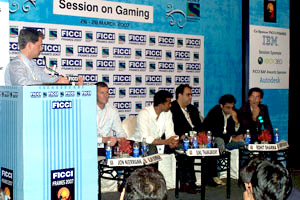 After a host of presentations from the companies represented by the esteemed panelists, the session moved onto a serious discussion on Indian centric issues of concern.

Giving an overview of the gaming scenario worldwide, Rohit shared that the international gaming space was getting dominated by online gaming. As per the PWC report, gaming is worth $45 Billion of which $11 billion comprises of online. There are 250 million consumers on the online front. According to Rohit, India is 4-5 years behind China and Korea when it comes to gaming. He said that according to estimates there would be around 200 million internet users in 2010 with 40 million using broadband of which the larger share would belong to the age group of below 20. 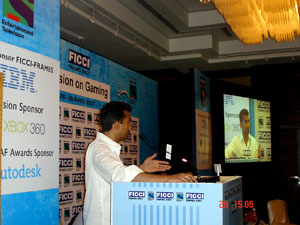 Nokia N Gage and Gaming are seen as synonymous, and talking about this, Mark spoke about how Nokia through the N Gage platform is trying to get people across the globe to discover, access, buy, manage, play and share.

Nokia’s priority is to connect through play. Mark felt that consumers often find it difficult to get the games on their phones and that is something that Nokia is looking to solve and overcome. The N Gage experience is going to be made available on multiple devices, giving the consumer a chance to experience music, games, videos and community events.

Spark’s Sunil put forward the question, asking “What it would take to build our own content in India and whether or not that content would prove to be profitable. As we all know. It is expensive to develop games in India especially for the PC and console platform. Sunil sees a shift in paradigm, for which he gave credit to X BOX 360 and the PS3.”

Downloading demos from the X BOX and Playstation sites, he thinks is a good idea since it reduces the cost and also gives the consumer a chance to experience the game and then go and buy it. Sites which offer the privilege of downloading demos, open doors to even those who have made fairly small games. What is of prime importance is the quality.

Alan went on to say that the price of connectivity is the key factor here in India. Microsoft as a company which is trying to promote gaming and also X BOX 360 is trying to create a value proposition that would be on par with what will be feasible in the market. According to Alan, with Government engagement and a proper regulatory framework in place and with the creators and aggregators being aware of such a body and framework, it would help in creating a feasible model.

The questions in the Q&A session ranged from in- game advertising to the existing role between the aggregators and the creators internationally. Also touched upon were questions on education and games and the SMP guidelines.

Addressing the question on in -game advertising, Quentin said that the games business is a services business. Through games it is possible to create a live interaction with gamers. Interactivity here is the USP. Localization is also of importance. The challenge, Quentin felt is that of the publisher’s flexibility to modify the game as per the requirements.

Speaking further about education and games Quentin concluded by saying that “A lot in the space can be done once the studio is established. The content that is going to be created for those games should not be modeled on the course but to look at the subject as a whole. The games should have an appeal that naturally induces the children to learn and grow”