The zephyr of non-fungible token or NFT in recent times, has been touted as the next futuristic technology. In 2020, NFT transactions skyrocketed by 3X and has reached more than $250 million as per the Non-Fungible Tokens 2020 yearly report from Non Fungible and L’Atelier and it continues to leap in 2021. On one side there are startups which are eventually growing up around crypto and NFT on the other the knowledge on Blockchain, crypto are not enough. And when the Blockchain technology combines with gaming it has potential to do wonders. For example, CryptoKitties which raised a $12.5 million investment, where some kitties were sold for over $100,000 each. Sooner CryptoKitties were added to the ERC-721 standard, and with it NFTs hit the mainstream.

Post CryptoKitties there has not been much of a noticeable buzz around NFT but earlier this year, a JPG file NFT created by American artist Beeple was sold by Christie’s at auction for $69.3 million. Then digital ownership of the first tweet made by Twitter CEO Jack Dorsey in 2006 was put up for sale for $3 million and purchased by a Malaysian blockchain company CEO. Also, National Basketball Association (NBA) joined hands with Crypto Kitties maker Canadian-based Dapper Labs to create its version of a collectible digital asset. This has created buzz and today brands like Nike, Louis Vuitton and Breitling; Turner Sports, NBA, Formula 1, BBC, Warner Music, Epic Games, Ubisoft, Atari and so on are entering the NFT space.

At the IGDC 2021 panel Follow the Market: Predictions 2022 the experts enlighten on the future and the potentiality of blockchain in gaming. The eminent panelists are Zynga VP and GM Akshay Bharadwaj, Junglee Games founder and CEO Ankush Gera, Lila Games CEO Joseph Kim, Bombay Play co-founder and director Oliver Jones, and the session was moderated by Krafton Anuj Tandon. 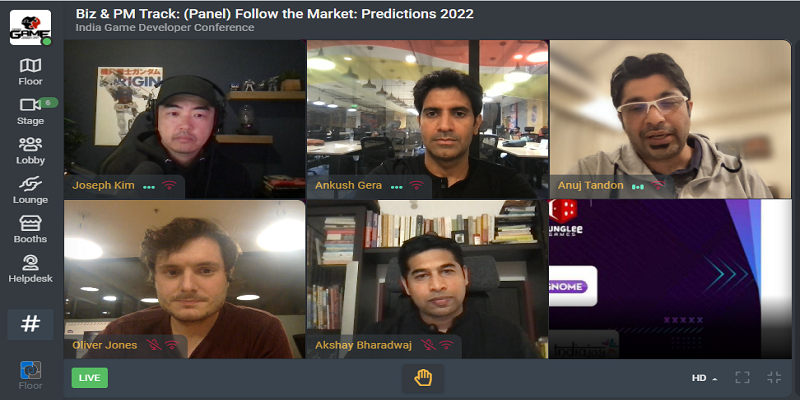 Speaking of the NFT and block chain hype of buying and selling, NFTs have increased since 2020. But with such new technology it could be dangerous to invest in. Kim shared, “Not everybody has much knowledge about it, including the ones who are buying and selling NFTs. When we look at the society in general the ownership of digital assets will become a trend  and since it involve use of a different currency not everyone will be able to afford similar to owning house, stock ownership or tesla or things like that. Owning digital assets for a large part of the world  is going to be that important in a sense of ownership. Further in the future there will be a notion like a digital or online presence of some kind similar to how people flex in society about assets.

In terms with gaming he expressed, “NFTs are the future for cross game perspective the only thing I’m worry about is the monetisation model, because when you launch a new game and if you already have a bunch of assets from the previous skin that you bring forward that brings impact on economic model of the new game.”

A week back, as per TechCrunch report, Zynga making moves to expand cross-platform and onto the blockchain. They have a full proof plan on projects based on blockchain in the next few months, however, no concrete details has been revealed yet.

Bharadwaj said, “NFTs have a  lot of potential and it is going to take to restabilize. Long term perspective looking at human desire of ownership that’s not going to fundamentally change. How it will evolve there will be whole new parameters depending on the growth of the ecosystem. One of the aspects is how Zynga is  currently looking for a cross platform place, another aspect is how Axie Infinity has taken the concept of play to earn where a person can earn their  living with an Axie Infinity account.”

Bharadwaj also predicts that the NFT base companies will be worth more than 10 billion value accumulative in 2022.

Since the rise of NFT, a lot of new startups, platforms, and crypto currency exchanges have emerged but many of them  are not authentic in terms of their frameworks. Gera believes, “Most NFT startups will shut down pretty soon but there will be few who will survive in a very very strong way.”

He explained that over the years one prediction that we were fairly right about as an industry is that the freemium model with localised content is still not a driver of revenue even to date top grossing games that you published by Korea or US and so on. However he hopes that some few folks could emerge and change that.

“I think the play to earn model is very interesting because one thing we are aware of that works well in India so far when it comes to localised content is skill gaming. So when we combine things to be sort of less risky, more fun than people will play. For example  in the Philippines people who used to drive for Uber are now playing on Axie infinite because that gives a means to live. That is very powerful and I do see that it brings in opportunity,” Gera added.

With respect to India, he does see that the User base of trading crypto is small but the volumes are still very strong. Indians are keeping Axie Infinity  in mind at the same time they are aware that economies are challenging for the one who has been iterating on Axie Infinity for a while. “Crypto plus gaming there will be few winners there will be some regular size hurdles on both ends but there are chances the few companies emerge that bring the confluence in a beautiful way and create a right economy by creating a whole gaming ecosystem that combines crypto, nfts, and so on.”

Oliver said, “Standup startup in casual gaming is making 10x of revenues approximately. In crypto, it is very tempting to unlock higher valuation, but at the same time you have to actually do it. A lot of us are still learning the routes, since it’s new to almost everyone, therefore it’s better to get educated and then make a move in that space. Crypto could add two bn to annual revenue which will become five bn in total in 2022.” He further believes that there are high possibilities that going forward there are high chances that there will be more crypto traders than stock traders.

Going forward in India, a proper regulation will build up which will bolster the reputation and clarity on platforms, coins and the surrounding businesses. Therefore, there are high chances that a lot of coins, exchanges will be discontinued. There will be only a few of the dependable coins like Bitcoins, Ethereum, XRP and platforms like Binance, WazirX will remain as they have been in the market for some time and have very strong technologies. NFT is booming currently, and it will evolve in coming years, therefore, it will be interesting to see how it will impact or affect stock exchange and how it will revolutionize the gaming ecosystem going forward.