The burgeoning demand for casual and hyper casual games and numbers of users have coerced brands as well as OTT players towards gaming.  Just before the covid19 pandemic hit India MX Player introduced its gaming feature in February 2020, and since then it has grown exponentially. Recently, MX Player has shared an overview and performance of its gaming platform in the year 2021 and according to it gamers spent 4.35 billion minutes on games on the streaming platform.

The online gaming industry has seen an upward trend since 2020 on the back of a ‘mobile first’ phenomenon. Since its inception MX now hosts over 100 hyper casual games that can be played for free and come with multiple layers of tournaments and rewards for winners. The past year saw a huge rise in the number of visitors on the platform and the total time spent on it.

In conversation with AnimationXpress, Gaming and International business head Nakul Kapur shared, “Gaming on MX Player has been growing at an exponential pace since its inception in early 2020. Today we do over 8,000 sessions on our games tab every minute, which is a testament to the growth of gaming on MX. Data around the report was collected by our internal analytics team.

As per the report, the state of Bihar topped the list in terms of gameplays and engagement, and non-metro user engagement was 20 per cent higher than the metro user’s engagement. Patna, Delhi, Lucknow, Kolkata, Jaipur, Ahmedabad, Hyderabad, Chennai, Pune, and Mumbai were among the top 10 cities that contributed to 66 per cent of the gameplays on the platform. Nearly 96 per cent playing users were below the age of 35, with 74.3 per cent of them being millennials.” 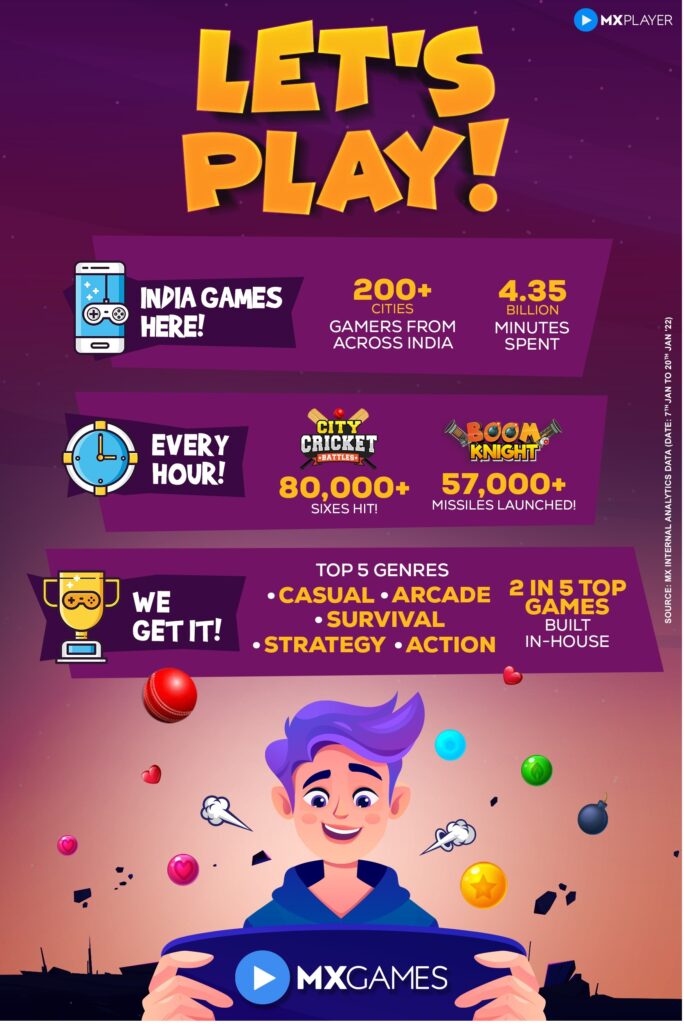 Here are the key metrics:

MX Player intends to engage audiences from all age groups as Kapur shared, “As games are now becoming the mainstream medium of entertainment, we want to leverage this opportunity and cater to audiences across age groups by offering high-quality player vs player games to further increase our engagement on MX Games.”

It is very important to have a proper strategy to boost engagement. For that they run topical and festive campaigns like real world rewards. They have collaborated with partners in India and abroad to mix games across genres. Also, unlike other pay to play platforms, they offer free to play games across fantasy, prediction, arcade, and racing genres amongst others.

He further shared, “We have also introduced the MX coin economy on the platform wherein users can earn coins by engaging in multiple activities on the platform and in return use those coins to convert to Amazon coupon codes or coupons of various brands like Zomato, Myntra, CoinDCX, Tata Cliq and so on.”

As per MX players data, the majority of their audiences are millennial males with the male to female ratio being 80:20. To balance that ratio difference, he mentioned, “We are working on finding insights as to whether female gamers have specific motivations and game play behaviors. It’s clear that more and more Indian women, especially the younger generation, are poised to become avid gamers in the near future and we will continue to work towards building and bringing more games that cater to this demographic.”

As per Kapur’s insights today avid gamers are now searching for a gainful entertainment experience and are ready to pay for games. He added, “With a robust regulatory and legal environment to help the business scale quickly, this will be a new opportunity for the industry.”

According to Kapur, hyper casual games involve less production costs. Therefore these games are easy to build, easy to play and are largely popular amongst the audiences. Because of the competitive market in the hyper casual games segment, the challenge is to be able to stand out with your offering. Kapur shared, “While the game mechanics are simple and easy for users to understand, it is an uphill task for developers to create games with a deeper level of engagement along with continued updates in terms of content refresh, added difficulty or timely reskinning.  Furthermore, it is essential that developers who work on ad monetisation, do not present ad opportunities that are intrusive but subtly add these opportunities in the form of a power up or any other add-on for the user, further enriching their gameplay experience.”

Going forward MX aims to leverage high quality games on their platform and aim at increasing their user base globally. He  added, “Metaverse is going to be the next big thing in the gaming industry. It will give a chance for users to engage in this gaming space at a much deeper level. Moreover, games will have heavy mechanisms along with features and combinations of different genres. The games will also be more realistic and relatable and will require skilled players.”