Global Esports (GE) is the champion of Skyesports Championship 2.0 Valorant Phase Two and they have squashed team Tamilas. They reigned over Team Tamilas with 3-2 score in the finals.

The Phase Two grand finale was based on best of five, and the first round commenced with GE’s favourite map ascent. GE played like the knight in shining armour and squashed team Tamilas with 13-7 score in the first match.

That second match commenced with Heaven map where GE initially started as attackers and team Tamilas as defenders. It was difficult to predict who will win when the two teams went neck to neck at one point; GE was at 4 points and so was Tamilas. During that point, everyone felt Team Tamilas will pick up the game but the match ended with final points at 13-9. According to the commentators, GE’s strategy to rush together at enemy worked well to take over to Tamilas.

With that, the third match commenced with The Bind Map and team Tamilas gave a tough fight to GE. Initially, it was hard to score for GE but later GE picked up and till the end moment it was unsure who will win, but finally, it was Team Tamilas who won that round with 13-11. The winning spree followed by Tamilas for the second time as well in the fourth match with 13-10. This round was intense as both the teams played well but the score difference that Tamilas created at the beginning of this match was maintained till the end. This leads to the final leader board with 2-2 which meant that the final round would be the deal-breaker.

If the previous rounds were intense then the last and the final dealbreaker match can be known as the most nerve-wracking, nail-biting match. The match commenced with a strong start by Team Tamilas but Global Esports picked up its pace as the match progressed and then again slowed down by losing consecutive 4 matches. However, they pulled their socks up and made a comeback. Even till the last moment, there was a high chance for team Tamilas to win the tournament as they were giving a tough fight to GE players. As we know, GE won the initial two rounds, followed by Tamilas winning the next two and finally GE dominated the end of the finals with a score of 13-11. Bhavin ‘Hellranger’ Kotwani became the MVP of the match with a kill score of 200 points.

With the end of the tournament, GE was applauded for the terrific gameplay both during Phase One and Phase Two. GE acquired the top four best player positions of the entire tournament whereas Velocity gaming who were the Phase One champions bagged the fifth position. 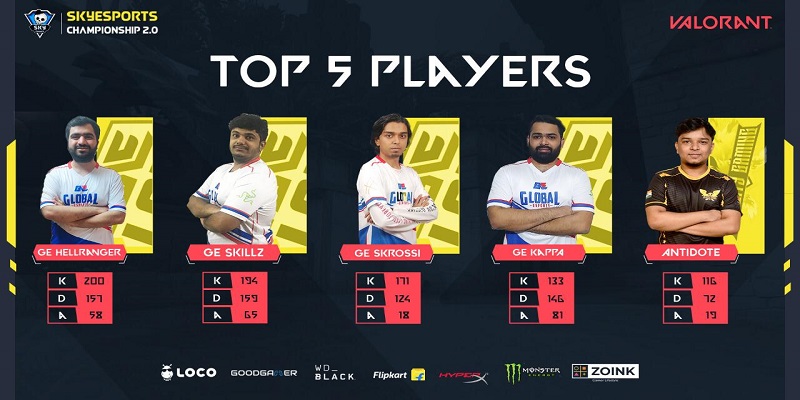