Jagran Play, a gaming and entertainment wing of Jagran New Media, announced the upcoming CODM Tournament with an enormous prize pool of Rs 20 lakh and a lot more. Jagran Play Esports Tournament announced Betway as their presenting sponsor and Mediatek as the powered by partner along with Playtonia as Esports platform partner. 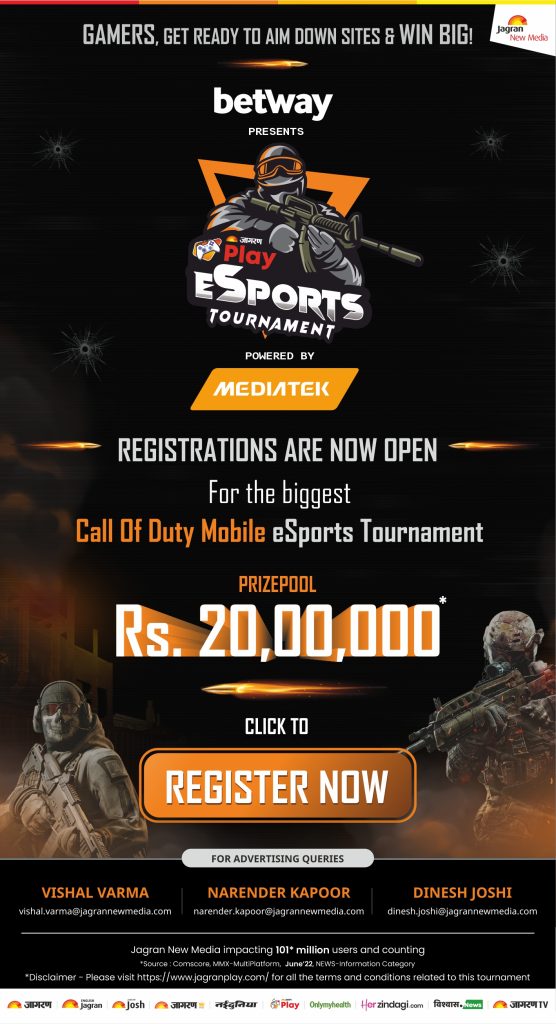 Jagran Play is an online gaming platform aspiring to offer a one-stop destination for all kinds of online games. It is a non-stop treasure trove of Esports, Play-to-earn, Free-to-Play, Real Money games and gaming news all in one arena of adventure. A massive Call of Duty Esport Tournament, Jagran Play is creating a niche by offering its users a ‘limitless’ realm stocked with unlimited gaming experience.

Catch all the buzz and live action with 75+ hours of live streaming, 3000+ players, 500+ teams, and 500+ matches. This journey will be accompanied by some Pro Gamers and Top Teams. A 44 day tournament where gamers can display their awesome skills and take home a grand prize, the top teams joining are Godlike, Enigma Gaming, Team Vitality, Revenant Esports and many more.

While talking about the launch of this esports and its association with Betway and Mediatek, Jagran New Media CEO Bharat Gupta said, “The recent spike in competitive gaming and mobile esports contributed to bringing up the industry into mainstream entertainment. Jagran Play along with their esports partner, Playtonia, will strive towards providing an exciting experience to its users and audience along with an opportunity to win exciting prizes in the tournament. To further amplify the gaming capability and interest of a user, Jagran Play is working towards creating a seamless ecosystem of the gaming and competitive universe.”

On the announcement, Jagran New Media chief revenue office Gaurav Arora said “The strategy is to create something impactful, to look beyond what we have currently. As the youth is highly engaged in these activities and are gaining personal interest in the gaming area, we are in action to offer opportunities on Jagran play which will increase our visibility and help us grow. IP’s like these also add value to advertiser ecosystem where they have an opportunity to reach out to a very specific set of audiences.”

Furthermore, Playtonia’s Sanupam Samantray esports added, “The upcoming days are expected to bring up more enthusiasm in the community as we have seen a great deal of interest among the participants and the audience. The way esports content is catered towards this niche welcomes a multitude of new users, as well as keeps already existing users invested in the amazing news. Our partnership with Jagran Play for this campaign is just an initial step towards achieving the same goal. We look forward to a prospective association and intend to encourage upcoming talents.”

This CODM tournament will include an invited team qualifier where the top four teams, after the never-ending epic combat will qualify for the Grand finale while the online qualifiers unveil yet another four teams, after a gruesome qualifying series of matches.

The esports matches will be streamed on multiple platforms, including the official YouTube and Facebook channels of Jagran Play, Jagran New Media, Dainik Jagran, along with their websites.