Axis My India released its latest findings of the India Consumer Sentiment Index (CSI), a monthly analysis of consumer perception on a wide range of issues. The May report highlighted that news related to elections, political parties, the Russia-Ukraine war, sports, entertainment and Covid-related updates were the top five preferences of consumers. The survey also revealed findings within the advertising ecosystem. It discovered that majority of the respondents believe that advertisement claims on television and in the newspaper are far-fetched. It also stated that ads shown by Dream11 and Tata Neu have captured the interest of consumers in this season’s IPL. At an overall, level 22 per cent of the respondents mentioned that they have watched IPL this year.

The May net CSI score, calculated by percentage increase minus percentage decrease in sentiment, was up to +12, from +11 last month and continuing the upwards trends noticed in the last four months.

Commenting on the CSI report, Axis My India chairman and MD Pradeep Gupta said, “The evolved and re-energised consumer community reflects optimism towards increasing expenditure in discretionary spends showcasing their affinity to ‘what they want rather than what they need’. This provides a ray light for brand and marketers to tap towards the shifting priorities of consumers. While brands are striving to capture the instant gratification instincts of consumers there is a need to understand context and content to capture the right eyeballs. On a holistic level, it is necessary to shake the long-drawn perception of consumers being a homogenous community as every individual has distinct aspirations, seeks different investment plans, and consume varied news. The news industry has grown in the last year or two with the Pandemic, the Russia -Ukraine war or the Sri-Lankan economy crisis but elections and political news remain the most watched content by viewers. Interestingly even with better opportunities abroad 64 per cent Indians would prefer to stay in India and work towards a better living, something we all should be proud of!”

On topics of current national interest: 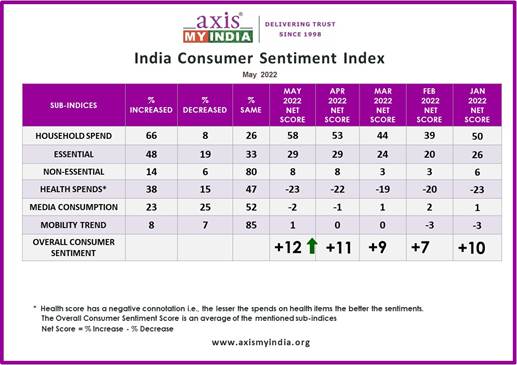