Many say the massive home video game console industry has killed the market for arcade game. Is it the reality? To a certain extent, yes but the arcade game style is still favoured by many at the popular hangout places like restaurants, clubs, malls and so on. Technavio has been monitoring the arcade gaming market and expressed that it is poised to grow by $1.56 billion during 2020-2024, progressing at a CAGR of almost two per cent during the forecast period. The report offers an up-to-date analysis regarding the current market scenario, latest trends and drivers, and the overall market environment.

The COVID-19 pandemic continues to transform the growth of various industries, however, the immediate impact of the outbreak is varied. Where a few industries will register a drop in demand, numerous others will continue to remain unscathed and show promising growth opportunities. COVID-19 had a low impact on the arcade gaming market although, due to social distancing the market growth in 2020 has decreased compared to 2019.

The market is fragmented and competitive because of the presence of many vendors. Vendors compete based on features, technology, content quality, and price. During the forecast period, the competition is expected to intensify as vendors are adopting advanced technologies to gain competitive advantages. BANDAI NAMCO Entertainment Europe SAS, Bay Tek Entertainment, and Capcom are some of the major market participants. Although the high scope for monetization will offer immense growth opportunities, the threat from counterfeit products will challenge the growth of the market participants. To make the most of the opportunities, market vendors should focus more on the growth prospects in the fast-growing segments, while maintaining their positions in the slow-growing segments, like parimatch app.

According to the report the market is driven by the increased physical activity on arcade gaming. However, the threat from counterfeit products might challenge growth. APAC dominated the market with a 51 per cent share in 2019. Despite the growing adoption of smartphones and tablets for gaming, an arcade machine still has a target audience whose spending on gaming has only increased. Considering the enhanced gameplay experience, arcade gaming has limited substitutes available in the market. Over 80 per cent of the total revenue is generated from gamers who have already played the game in the past. As the popularity of new age arcade machines increases, they will be accessible to the larger population. This will result in more gamers being hooked to the game and will result in increased revenue for market vendors.

Currently, with the advent of Virtual reality, arcade makers have begun to experiment with Virtual reality technology. Arcades have also progressed from using coins as credits to operate machines to smart cards that hold the virtual currency of credits.

More modern arcade cabinets use flat panel displays instead of cathode-ray tubes. Arcade games may be connected to the internet through services such as ALL.Net, NESiCAxLive, e-Amusement and NESYS, allowing the cabinets to download updates or other games and players to play online with other players and save their progress, unlockable content and credits which are then accessed using a smart card. Pac-Man: Pac-Man is a maze arcade game developed and released by Namco in 1980. The original Japanese title of Puck Man was changed to Pac-Man for international releases as a preventative measure against defacement of the arcade machines by changing the P to an F. The Pac-Man video game franchise remains one of the highest-grossing and best-selling game series of all time, generating more than $14 billion in revenue (as of 2016) and $43 million in sales combined. The character of Pac-Man is the mascot and flagship icon of Bandai Namco Entertainment and has the highest brand awareness of any video game character in North America. Asteroids: Asteroids is a space-themed multidirectional shooter arcade game designed by Lyle Rains, Ed Logg, and Dominic Walsh and released in November 1979 by Atari. The object of the game is to shoot and destroy the asteroids and saucers, while not colliding with either, or being hit by the saucers’ counter-fire. The game becomes harder as the number of asteroids increases. Asteroids was one of the first major hits of the golden age of arcade games; the game sold over 70,000 arcade cabinets and proved both popular with players and influential with developers. Space Invaders: Space Invaders is a 1978 arcade game created by Tomohiro Nishikado. Within the shooter genre, Space Invaders was the first fixed shooter and set the template for the shoot ’em up genre. The goal is to defeat wave after wave of descending aliens with a horizontally moving laser to earn as many points as possible. Space Invaders was an immediate commercial success; by 1982, it had grossed $3.8 billion, with a net profit of $450 million, making it the best-selling video game and highest-grossing “entertainment product” at the time. Adjusted for inflation, the many versions of the game are estimated to have grossed over $13 billion in total revenue as of 2016, making it the highest-grossing video game of all time. 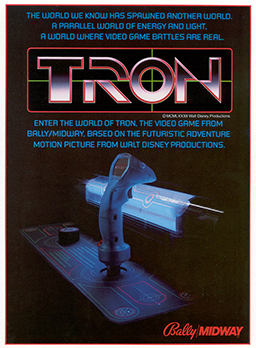 Tron: Tron manufactured and distributed by Bally Midway in 1982. The game consists of four subgames inspired by the events of the Walt Disney Productions motion picture Tron released in the same year. The lead programmer was Bill Adams. Tron was awarded “Coin-Operated Game of the Year” by Electronic Games magazine. The New York Times reported that 800 arcade cabinets were sold by 1982. The book The naked computer reported that Tron made $45,000,000 by 1983. In USgamer’s estimation, 10,000 cabinets, were sold and the game made more than $30,000,000 of revenue by 1983. Yie Ar Kung-Fu: Yie Ar Kung-Fu is a 1985 arcade fighting game developed and published by Konami. Along with 1984’s Karate Champ, which influenced Yie-Ar Kung Fu, it is one of the games that established the basis for modern fighting games. In Japan, Game Machine listed Yie Ar Kung-Fu on their 1 March 1985 issue as being the second most-successful table arcade unit of the year. The game was a commercial success in Europe. It went to number two on the UK sales charts, behind Capcom’s Commando. Yie Ar Kung Fu went on to become the second best-selling computer game of 1986 in the United Kingdom, at number two on the overall 1986 chart.