Marvel’s Infinity Saga may have come to a fitting end with Avengers: Endgame, but fans still can’t get over the superhero extravaganza spanning across 23 films.

Now, MCU fans are hooked to a deleted scene that went viral from Avengers: Infinity War, that introduced the Smart Hulk meeting the Black Widow and Falcon during the war at Wakanda. Smart Hulk was finally introduced in Avengers: Endgame.

Fans are unhappy as this scene was dropped from the film and one fan wrote on Twitter -“I love Infinity War, but we deserved to see Smart Hulk’s transformation in the final film,” sharing the scene, which also shows actor Mark Ruffalo in his motion capture suit, and not as the huge green superhero.

Another fan was stunned that the makers deleted this scene and chose the ‘Hulk-Out’ scene from Avengers: Endgame. “I seriously cannot believe that’s what they chose [professor Hulk] over this.”

Most fans expressed that they would have loved to see Smart Hulk vs Thanos at the end too. The recently unveiled scene is similar to that of Avengers: Age of Ultron, in which Natasha Romanoff tries to calm down Hulk after a battle, but here, she realises that he no longer needs calming down, as the personalities of Bruce Banner and Hulk have merged.

In a recent conversation with Vanity Fair, Avengers: Infinity War screenwriters Christopher Markus and Stephen McFeely revealed why they dropped the entry of Smart Hulk in the film. 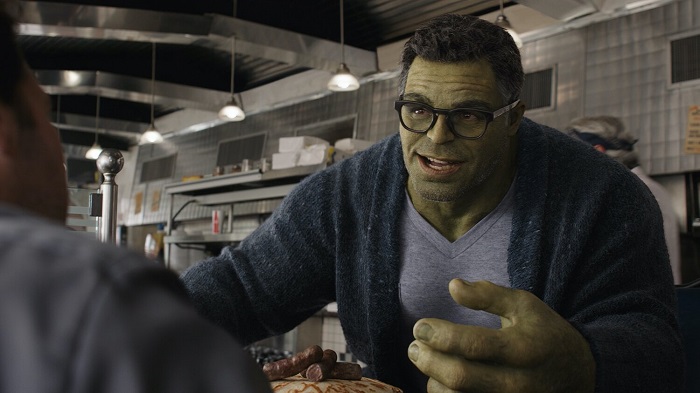 “During the Battle of Wakanda, the Hulk refuses to come out, and they eventually come to a realisation or a compromise, and he busts out of the Iron Man suit, and beats the heck out of this [monster]. It was a lot of fun, but it came at the wrong moment. It was an up, right when everyone else was down,” Markus said.

McFeely further added that too many victorious moments during that fateful war would have diluted Avengers: Infinity War‘s march toward Thanos’ ultimate victory. “That whole third act is a march toward losing, and this Hulk scene is a big win, right? It’s a guy solving his problem and being a funny character because now he’s eloquent. We had to, at the last second, scrap all that, put aside all these scenes that used to have Smart Hulk, and then reshoot the first act of Endgame… that used to have the Smart Hulk… that helped illustrate the changes everyone had gone through after the five year time jump,” noted he.