Bengaluru GAFX conference 2019 opened with an enormous amount of promise and enthusiasm at the Lalit Ashok Hotel. Kicking off the event with a customary lamplighting ceremony, ABAI management team addressed a huge crowd comprising of AVGC industry’s top professionals, students and enthusiasts that had thronged the Kalinga 1 auditorium.

Spanning across the entire campus of the hotel, GAFX 2019 treated attendees to a wide range of offerings and knowledge to absorb within themselves. Whilst the contests and exhibition outside showcased the artistic prowess of the participants, the sessions inside marked a starry convergence of professionals and veterans from all over the world. 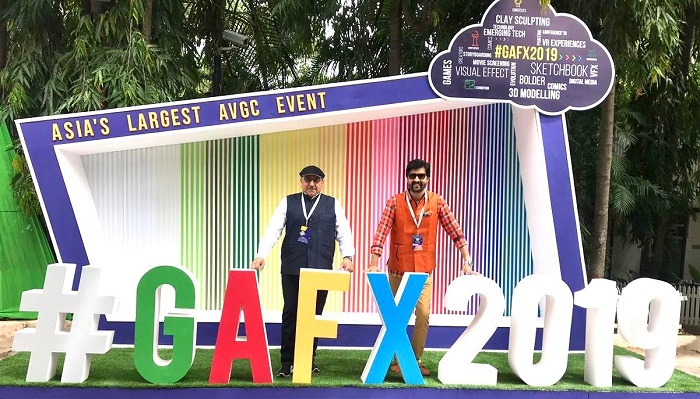 LinkedIn head of operations Kiriti Rambhatla dived into the world of comics and beyond, outlining the history of its readership and subscription to the state of its current patterns of consumption.“We’ve had an established system of storytelling through printed work that goes back even before the British left. Chandamama to Amar Chitra Katha and then you have Chacha Chowdhury with his sidekick Sabu from Jupiter and Raj Comics. There was a huge readership back in the day,” he informed.

After a short tea break, there was more in store as Trojan was a Unicorn Brand Ambassador PC Vikram presented a screening of some of the best content from the festival.

Well-planned show-flow allowed for smooth yet passionate exchange of ideas amongst the speakers, feeding in the aspirants in the crowds with all aspects of production in the AVGC sector.

A session held for benefiting the students saw a discussion on how budding aspirants and students can be given scholarships and requisite resources including provisions for internships after they complete their graduation. Reflecting on the concerns and challenges that students often face, ABAI president Biren Ghose indicated that there are good things in store for the students in terms of grants, scholarships and internships which are likely to be revealed over the course of the event.

It was further followed by a chat featuring foreign speakers who shared their insights into the world of brokering deals and pitching stories. During the discussion centered on how Indian artists can explore co-production globally, creative specialist and content creator Sheila De Courcy advised,  “Co-production in Ireland is that there are very good tax breaks there, average percentage of money that they pay, they can spend it on sound or audio mixing. In order for anyone to co-produce with Irish studios, the content needs to have some Irishness about it. So if a story from India has some Irish character or Irish location”

Building upon the suggestions as to how Indian content creators can go about partnering with other countries, Branscome International LLC president Catherine Branscome added,  “One of the short practical answers is that some countries have treaties between them. For example, If you’re going to work with Canada, you could be working on a project while staying in India and getting funding out of Canada and they count you as if you’re a Canadian. This is true in other countries too. Like Germany, Brazil, France and others that are co-pro countries with India. So there are several but the countries that has the most treaties is actually Canada. If I were from India, I would look at the countries I need to focus on because ultimately you want to collaborate creatively but you always have to keep a little bit of a business hat on and those countries have funding mechanisms. There is a lack of government funding in India. The most likely resource in India I think is the number of world-class awesome studios here. You can get them interested who can actually partner with you. That would be a great incentive to pitch you IP”

The event concluded with a GAFX exclusive: The Making of Chota Bheem Kung Fu Dhamaka followed by the world festival premier of the same feature.

Speaking about Bengaluru GAFX 2019, co-chair of Bengaluru GAFX 2019 and secretary, ABAI, B.S. Srinivas shared, “The turnout on the day one, GAFX 2019 has been massive as animation, visual effects, gaming, comics, enthusiasts along with professionals, industry veterans, academia, technology partners, animation, VFX, games studios and production houses have been taking part with great interest. This defines the future of the city and the state as a leader in the AVGC sector. It was an unprecedented turnout with close to 3000 people comprising of students as well as professionals who thronged the premises of the mega event.”

While the monsoon breeze invigorated the spirits outdoors, it was the insightful showers of knowledge inside the session-halls that enthusiasts made the most out of. The footfall is only expected to rise as the excitement piles up for more fun-filled sessions for the second day at GAFX 2019. We shall keep you updated. Stay tuned!