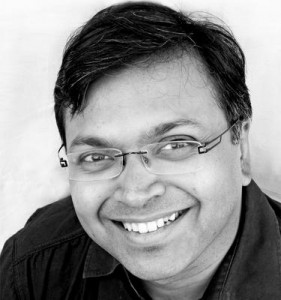 In the opening session of this year’s Anifest the audience was treated with a session on five tips for writing a good story by Devdutt Pattanaik, who is a mythologist, leadership coach, and consultant on culture and belief.

Devdutt started off his session by talking about how Indian writers mostly approach writing with a lot of passion, but then these stories lack in structure.

“For me a good story is the combination of using a Power Point presentation along with an Excel programme. A good storyteller knows how to combine pictures and numbers in just the right ratio,” exults he.

Devdutt then goes onto explain; what according to him are the five important tips for writing a good story.

The first tip which Devdutt gave was to combine passion with structure and how important it is to get the right mix of both these elements.

“The West has a very good structure in place, but they lack on the passion front; thus they are capable of working in huge teams and create larger stories. But, back here at home there is a lot of passion, but we lack structure in stories, thus don’t find many buyers for our stories,” he expounds.

The next couple of tips that Devdutt gave for writing a good story were: understanding for whom are you writing the story and also the psychology of your readers.

“A writer is like a chef and he should serve the dish according to the needs of the consumer, so you can’t serve something sweet to a diabetic or non-veg food to a vegetarian,” Devdutt smiles.

He further states that a lot of time is spent in the west understanding the needs of the audience and that practice needs to be adopted here, one can’t keep taking his/her audience for granted.

“An Animal sees another animal in four ways: either it is a prey, predator, rival or a prospect for mating and humans are no different. Once these questions are answered then the story can take shape,” he adds.

Devdutt explains that storytelling has the power of constructing reality, and good storytellers give perspective to people.

In his next tip he goes on to talk about the different structures of stories, like the Greek structure of storytelling, where the story is of a victim defeating the powerful and transforming into a hero and the other structure is the Biblical narrative, where the powerful or mighty are good, but their children or disciples don’t listen to them, this is also termed as the leader and follower narrative.

“The Indian audience has been conditioned to think in the Greek structure, but is slowly evolving and this can be seen in recent movies like Singham Returns, where the story is a struggle between both structures,” Devdutt reveals.

He finally ends with his tip of understanding Indian aesthetics and making stories with a lot of ‘Rassa’, by which he means that the story should be as succulent as a ripe mango and play with the emotions of the audience.

“Great stories have brilliant characters, who are unique in their own way but when they are all together it takes a scene and the overall storytelling to an all new level, Toy Story is a great example of this kind of storytelling,” he ends.

All in all a great way to kick off the 10th anniversary for Anifest conducted by The Animation Society of India (TASI). A lot more coming your way… stay tuned to AnimationXpress.com.