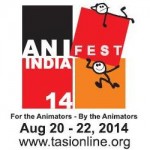 The Animation Society of India (TASI) certainly knows how to end the day on a high, after two very engaging sessions with Devdutt and Gayatri the proceedings took a more ‘filmy’ turn as the penultimate session was taken by film maker Hansal Mehta, of ‘Shahid’ and ‘Citylights’ fame, on the art of visual storytelling.

“The way to tell a story comes from within you, theory is just a matter of application, storytelling is building a journey for the character and I believe in working on the interpretations of the actors and not the other way around like in the case of animation,” Hansal said.

He further went onto say that animation and live action are not too different from one another as far as storytelling is concerned; if the story is well written then it can be made in any format or language.

Hansal added: “Woody Allen always attempts to get a master shot, and I resonate with that as well, for Shahid I studied how the courtroom really functions, so that my take on the courtroom scene was more visual and not so much dialogue driven as usual.”

After this thought provoking session with Hansal Mehta, the last session saw renowned film editor Deepa Bhatia, whose filmography includes the likes of Kai Po Che, Rock On!, Stanley Ka Dabba, Taare Zameen Par and My Name is Khan to name a few.

“As an editor I am the eyes of the director, which means I am the one who has to visualize the story and script the way the director has interpreted it and give it meaning and life,” explained Deepa.

She also showed glimpses of her work and explained how she had been told to interpret a particular scene but how she fought and argued with the director to make him/her see reason in the edit and giving more impact to the character or the scene in those movies.

Deepa said: “I am the last door through which the movie walks out, post that there is enhancements that are done by SFX, VFX or by the sound designers, but if I am not happy with the story itself then no matter how much enhancements are given the movie will never be the same.”

On that note Day 1 came to a close, which saw nearly a capacity crowd of 350 odd visitors glued to their seats as each speaker addressed various topics to help the young minds of today and also help fellow professionals on planning their way ahead.