Education Feature Film Institute
Arena Animation Jayanagar Bangalore has recently credited itself 3 nominations for screening at the 2012 MovingMedia student film festival [Detroit MI (USA)]. The three animation films PALL BILL WILL, FOLLOW ME and RAGPICKER has been selected in the animation competition category. MovingMedia is an annual film festival which will be taking place from June 20 th to 24th, 2012 at Detroit MI (USA). The four day-long celebrations includes multiple screenings and a one day Techfair which offers an array of free classes workshops and panel discussions reflecting current practices in film industries. 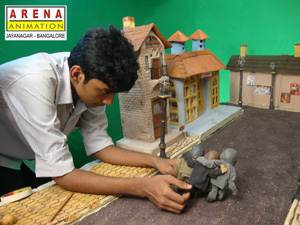 Speaking to Animationxpress.com, Chiranjit Ghosh, Creative Head, Arena Jayanagar Bangalore said “Moving Media Student Film Festival 2012 is one of the honorable Film Festival. We feel really honored and grateful with the fact that they have chosen our films for the showcase. Films from around the world are been selected and will be showcased in this film festival and our film will be one of those film, this thought itself only gives me goose bumps and I feel so happy that I am absolutely speechless. Being a part of Indian Animation Industry, I always dream that Indian animation films get recognized and create its own identity on the international platform.”

Pall Bill Will: The concept of this film symbolizes friendship. The word ‘Friend’ is very important in everyones life. The essence of friendship is portrayed in this film. The film is directed by Chiranjit Ghosh and the animators of this film are Amit Debnath, Magline Venue, Imran R.A, Anil kumar P.R, Anil Kumar P.N, Praveen. 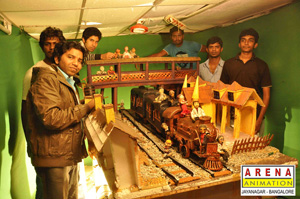 Follow me: The film is based on present day relationship between parents and their children. The film is directed and animated by Santosh A.P. and the music is by Saptak Paul. Rag Pickers: The story is about the working condition of rag pickers in India and how they are neglected by the society. The film is directed by Kareem Meppadi and animation is done by Viswas, Nayna and Ninad. All the films are produced by Indira Gupta.  AnimationXpress.com also spoke to some students, who were in making of these films they shared, “I am really happy as 1st time our film is nominated for the screening in USA.” Magline Venue (animator Pall Bill Will) “I think it’s really good for Indian animation industry.” Kareem Meppadi (Director RagPickers) ”I think very few animation student films in India are showcased on international platform.” Imran R.A (animator Pall Bill Will) Currently Arena Jayanagar Bangalore is working on 2D, 3D, Stopmotion & one Mix media work. connect@animationxpress.com