Tinkle, as we all know, is the most beloved comic of young and adults alike. Rajani Thindiath, who served as the editor and then as the editor-in-chief for a decade has moved on from the beloved publishing house. Talking to Animation Xpress, Thindiath shared her fond memories at the wonderland created by Uncle Pai.

Thindiath, who believes that diversity and equality are the values to birth new ideas, also wanted kids to open their minds to possibilities and to get them to question and verify any information. Being a psychology student, she was aware of the effects of subconscious conditioning on young minds. So she insisted that the team at Tinkle follows gender-neutral pronouns and nouns and also invented some! She tried showing a variety of skin tones, having stories challenging gender roles and stereotypes, celebrating diversity by showcasing stories set around the country and included disabilities as a normal part of a storyline. “What was gratifying was the enthusiasm with which kids observed and welcomed these changes,” she added.

Thindiath, during her tenure at Tinkle, had the privilege of working with and learning from legends such as Uncle Pai, Subba Rao and Luis Fernandes, who were the founding editor and team of Tinkle along with Kamala Chandrakant. Apart from these, she got the opportunity to work with many talented writers, artists and designers over 13 years. 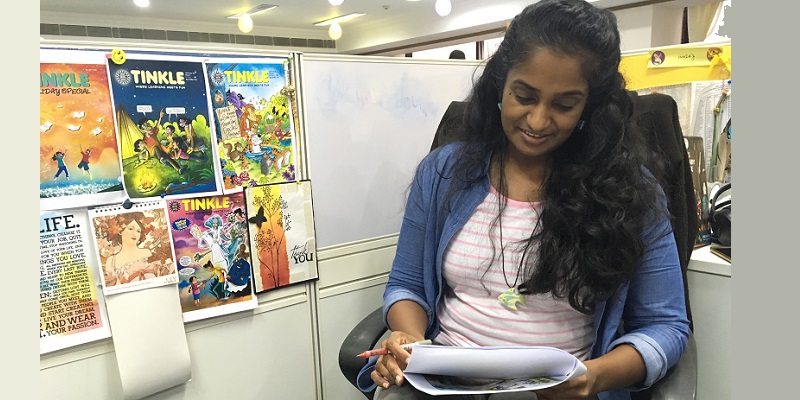 Thindiath will continue writing and curating fiction though she is platform agnostic. “Whether it is animation, web or TV series, publishing, comics or the gaming industry, I’m… game. And while I wait for the next exciting opportunity I’ve been upskilling apart from writing my second manuscript and peddling my first one, both high fantasy. I’m also having fun getting back to blogging,” she said.

During her time at Tinkle, she along with the team launched an array of new characters in a variety of genres from superheroes and comic horror to boarding school adventures and even a yoga-kalaripayattu fantasy saga, SuperWeirdos, WingStar, Dental Diaries, Buchki and the Booligans, School’s In, NOIS and YogYodhas. “We rebooted the iconic characters through refreshing story arcs such as Tantri becoming king or Shambu travelling the world or the Defective Detectives’ loony adventures with their Bunkum Trunkum of defective spy gadgets,” Thindiath added.

According to her the young readers’ feedback made the team do the changes and launch activities and events like Tinkle Awards (a fun content survey), IdeaStar (writing contest), Tinkle Squad (focus group) as well as the Tinkle Game Show (live game show on YouTube), Li’l Tinkle Stars (talent spotlight), vlogs, videos, and much more for the digital platforms.

Thindiath expressed that she will miss the Tinkle team, the Tinkle Toons and the awesome young readers who gave her so many ideas through their feedback. “The Tinkle team has always been tight. Pranks, witty banter and laughter were so commonplace that they often turned into impromptu brainstorming sessions. Creating stories and characters is always a delight with this kind of mental stimulation and bonhomie,” she concluded.

We hope to see many more interesting writings coming from Thindiath!