Today’s world is driven, regulated and almost controlled by social media. We cannot imagine our lives without the apps that have become an integral part of our existence. To focus more on the effect and how social media has emerged as a powerful weapon for making voices heard, Comic Books & More (CBAM) Summit saw a panel discussion on Webcomics – Raising independent Voices.

The panel consisted of popular illustrators, animators and comic artists Bob & Bobby whose works become viral in no time; The Beast Legion creator Jazyl Homavazir; Zal comic strip creator Cyrus Daruwala; webcomic artist, children’s book illustrator and storyteller Srishti Sharma; sharing their thoughts on how can budding artists leverage the power of the internet and social media to further expand their craft, and how well does the web platform serve the comic book creators.

Moderated by Abhijeet Kini Studios founder Abhijeet Kini, the panel discussion began with each member talking about their inspiration to pursue this field of art and create webcomics. Daruwala mentioned, “Like others, I have grown up reading comic strips. But I felt there was a gap in Indian comic strips as most of it were politically inclined. Zal was born from a feeling of lack of local characters and a gestation period of a few years.” 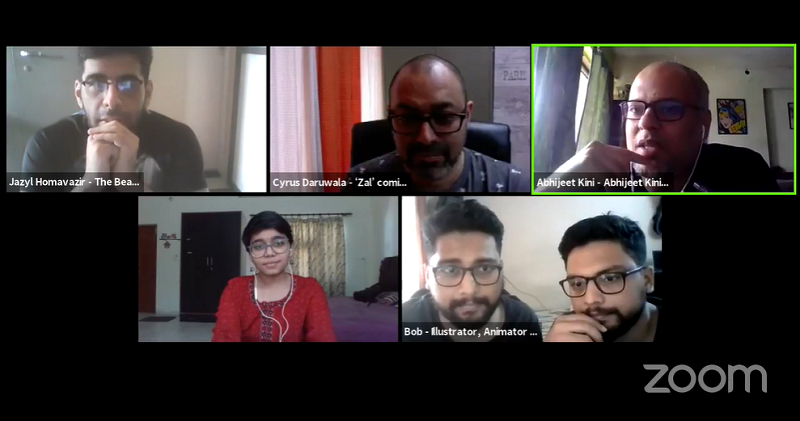 Homavazir, who’s an animator by profession said that The Beast Legion is a labour of love and his immense admiration for 80s adventure cartoons. “It’s a 59 chapters webcomic and I’m trying my best to put it out.”

Bob and Bobby aka Susruta and Saswata Mukherjee, the sketch addicts on the other hand, were inspired by Asterix, Tintin translations in Bengali and create imaginary comics of Tintin in Kolkata and crossovers between Tintin and Asterix. “The primary reason for what we create should resonate with us , even if it’s not trending or is subjected to trolling. We also create webcomics on topics that we think are important to be out there, or aren’t being talked about enough and need attention. For us it’s about creating awareness,” commented they.

Unlike the twins, Daruwala has to anticipate a lot of issues as his comic strip though available online is primarily released in Midday. “For Zal, I have to kind of predict every single strip as I write them much in advance. So it’s a mix of anticipation and luck. Some of the issues like the rising of fuel prices were predictions which fortunately and unfortunately became true. Due to COVID, I was in a dilemma if to bring the pandemic into the universe of my comic or remain in denial like in a parallel world. But then I decided to bring in COVID occasionally as the strip is based in Mumbai and it’s about normal city life . That’s what is Zal all about, it’s not at all politically inclined,” he said. 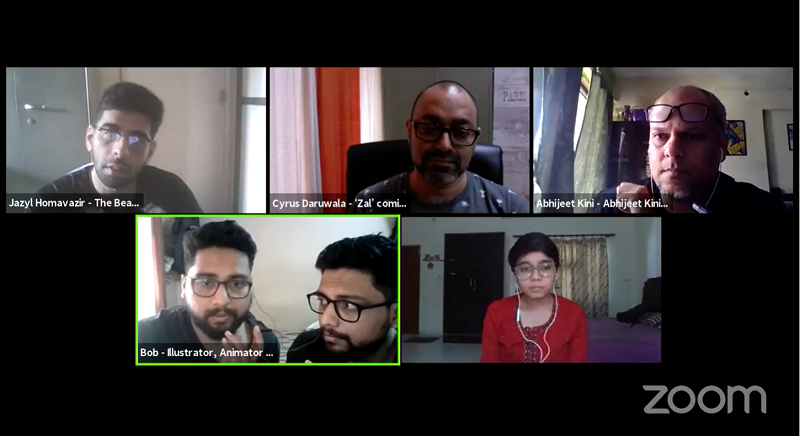 Agreeing with Daruwala and unlike Bob and Bobby, Homavazir too doesn’t mix his political outlook with his artworks.  “I’m politically quite active but I choose to keep my work separate as I want people to enjoy my art as art. I try to keep it as true to my art – promoting the anime and manga culture,” he exclaimed.

To Sharma, independent voice is about expression and it has been about the same thing for children’s works in which she’s channelising them. “Freedom of expression, teaching good habits, identifying good takeaways right from that age is also raising a voice for a cause as we have to find good things nowadays from things around us,” she noted.

Moving to technical pros and cons, Homavazir shared, “Social media exposure and algorithms helps in the wider reach of webcomics as one creator could promote on others’ pages and helps in building a community,” while Sharma as well as Bob-Bobby opined that these algorithms also force creators to post content frequently and that takes away the artists’ freedom to post at their will and measure an artists’ capabilities and quality of work on the basis of followers, and number of shares.

Sharma spoke about trolling and hate comments that affected her freedom of expression, “I faced a lot of hatred while interning for Feminism India and otherwise and that’s why I stopped making political comics as I was unemployed and scared of my security.”

The twin brothers also added, “Digital comics are easily accessible, and all but u can’t feel them, smell them which is very important to us, so that experience is irreplaceable.”

Daruwala signed off pointing out, “I’m still a fan of hard copy, you can’t replace the experience of a physical book. With changing times, we can definitely adapt to newer models but doesn’t mean we have to abandon the traditional medium.”