The first panel discussion of the CBAM summit saw noted names from the Indian comics industry coming together to impart insights about the art of storytelling and tricks and tips to sustain in the world of comics.

Chakraborty kicked off the discussion by going back to the starting days of each of them and how they have sustained. Kini began by saying, “I started my career as a freelancer while in college. Then I thought that I needed to start branching out. So along with commission work. I also started doing my own Comics – Angry Mausi, Rhyme Fighters which I published independently and I have dabbled into merchandising my comics and my characters. To reach out to as many people as possible so that if they have not read the comics, at least the merchandise gets them to know the characters. So diversification has been the key for me all the while.” 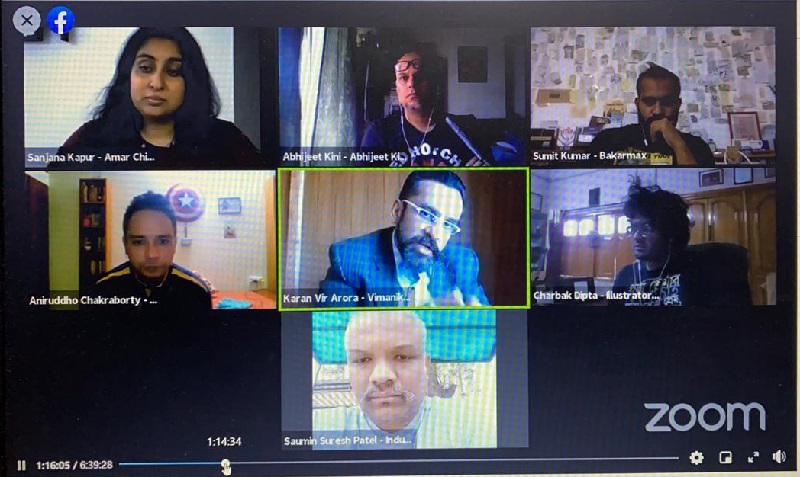 Arora mentioned that when Vimanika started, he was inspired by ACK and Virgin Comics headed by Sharad Devarajan, though the market barely existed. “There was nothing much when we began and distributors weren’t helpful. We had to beg them for taking our comics.There was a vacuum in the industry about new age storytelling and art. Juggernauts in Indian comics industry were absent unlike Japan (Manga),America and other markets. But we had the passion which convinced a distributor to take our comics and the response was great minus the sales. A known artist then urged me to go to the international market, and that’s when when I realised what India is lacking as a comics industry. Then Jatin Varma came with the idea of Comic Con India but even there we had challenges as people didn’t support or bought stalls. Then Vimanika officially became one of the sponsors of 2011 Comic Con India and the rest is history. Even AnimationXpress has been a great support since our inception days. Luckily our Shiva did well and here we are now.”

Kapur on the other hand had a fairly smooth run with ACK as she joined the reputed organisation right out of college in 2008 and has grown along with the company. “The best thing about comics that nobody teaches you comic writing and you evolve. I wrote my first comics in 2011. What Uncle left as a legacy , we are happy and proud to build on that. India is full of stories and there’s still a lot to explore. We are consciously changing the way we tell our stories nowadays as the company has evolved since its inception in 1967. The writers were from different times and working under different circumstances. We’re now trying to bring out untold stories that deserve to be heard like women pathbreakers. So my journey has been great and I’m fortunate to be a part of ACK.”

Dipta started out as a political cartoonist at TOI and wanted to channelise his Bengali culture and art into his writings. His Indian Aliens received phenomenal response so he decided to make a two comic book series out of it followed by International Aliens. Dipta has been a regular attendee at various International Comics Cons like Japan, Paris, America and many more. “What I saw in the West, they’re crazy about Marvel and DC. But in Malaysia they’re more into Manga. The regional (Bengali) industry has shrunk in comparison to that of the 70s-80s. What I feel would make a difference is that, we don’t need to be DC or Marvel. We need to create our own unique stories, go out of Bollywood and politics to make a mark as Indian comics on global canvas,” he commented.

Kumar agreed with Ram V’s point of lack of professional structures and lack of distributors that eventually affects the art of storytelling as it can’t sustain without financial profit. “Print is dead and I had to beg distributors to have my comic books during The Itch that You Can’t Scratch. Then I did Kashmir Ki Kahani with NewsLaundry on digital followed by Amar Bari Tomar Bari Naxalbari. This was also done as a webcomic first and then in print and surprisingly it worked. That’s why I do digital comics first as it’s more accessible, and then I put them out in print as then the marketing is easier and so is distribution. Plus you receive 100 per cent profit when selling on digital platforms ,” he stated.

He also added that 50 per cent of Bakarmax’s project is outsourced work and they want to keep working on their quirky, below the belt sense of humour as branded content works wonders for them given they have immensely improved their art and storytelling.

Kini noted that distributors would not agree to keep their comics tagging that as independent publishing and because they were targeted to adult audiences and taboo topics. “But at events like Comic Con, young adult audiences would come to us asking for Indie comics, slightly mature comics and we would tell them to come more to events like these and write to us directly. Here’s where the Internet and social media plays a huge part.”

Chakraborty added that, distribution beyond such live events have been really sour for the industry, and with the pandemic, however online selling model of comics and apps have been a saviour.

Patel noted that he started as an illustrator and comics are his passion but to sustain his passion he needs to work on other mediums. “I can’t sustain by just making comics. The numbers are really sad. Our pop culture and consumption of stories are different. Mythology is still consumed in humongous quantities and same stories are consumed in new attires everyday on television. I do comics only for passion and don’t look at the monetary side so I work in quarters to keep my passion alive. Our country is still evolving where adult comics and sex though enjoyed by the humongous population, is considered taboo, hence the maturity of storytelling still needs to come.”

As parting words Dipta advised newcomers to develop skills and use social media as much as possible to get noticed while Kini focused on diversification. Arora commented to have faith in one’s passion and art no matter the difficulty of the journey. “A great comic or a great art isn’t successful if it doesn’t get off a book rack. Have patience and believe in your craft, I had so many losses yet I had few distributors who believed in Vimanika and it kicked off. Those scenarios are starting to change for the better.”