AnimationXpress is back with another exciting summit- Comic Books & More (CBAM)! And this time for the Comics industry in India. The Indian Comics industry is thriving with talent and amazing content made almost.

The first day of the summit saw the who’s who of the industry come under one roof to celebrate the ‘big bang’ of the pop-culture extravaganza. The summit started with Animation Xpress CEO and editor in chief Anil Wanvari delivering the welcome note to the first edition, welcoming the stakeholders of the industry under one roof, right from the comic creators to merchandisers to publishers to discuss the scope, challenges and ways to leverage the Indian comic industry. 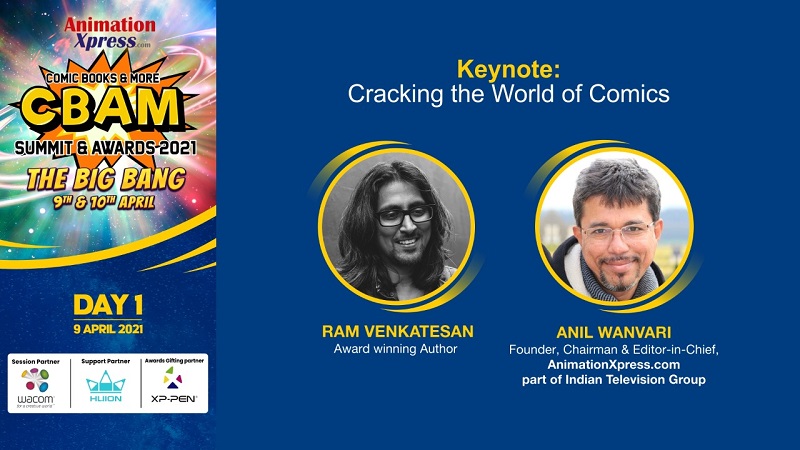 This was followed by the insightful and engaging keynote by DC and Marvel artist Ram V also known for Aghori and The Savage Shores. He shared how he left his profession as a chemical engineer to pursue comic book writing and is now also venturing into television writing.

He advised budding artists to have understanding of one’s craft and have the right discipline, professionalism required to excel in the business. He urged them to create their own stories and IPs while pointing out areas of improvement of the industry as a whole. 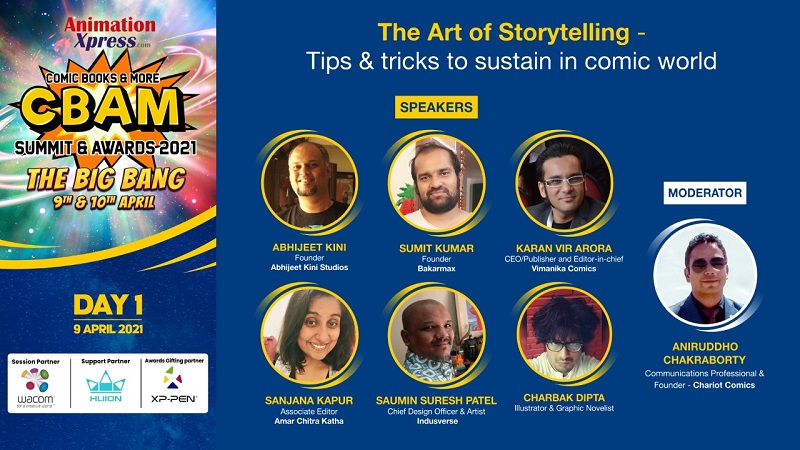 They discussed how print is slowly evading while digital and webcomics is opening newer distribution and marketing models for them. In fact, webcomics when later made in print are becoming more successful as the reach and popularity has already been created.

Arora added how Jatin Varma’s idea of Comic Con India created history despite having initial hiccups, when Vimanika Comics officially became one of the sponsors of 2011 Comic Con edition.

Across the world; be it the U.S, Japan, South Korea or the U.K, popular characters have spawn franchises spanning over clothes to toys to TV shows to movies to figurines to theme parks. The popularity of the comic book characters have inspired a business that continues to thrive among its patrons. Gizmos and figurines have given a new life to these characters.

Is the kind of fan-craze and fanfare often seen in foreign countries possible in India? Can a scalable licensing and merchandising business be built on the back of popular comic characters?

Panelists took turns to throw light on the subject over the course of the session. Character licensing and merchandising have been around in India for years now. While it has evolved to some extent; compared to the west, India still has untapped potential. Throwing light on the scenario, Desai pointed out, “We are at the stage where we have created some great Indian IPS. Chhota Bheem has done phenomenally well. Chhota Bheem probably rules every possible category as of today as far as the whole market is concerned. We have also managed to successfully bring in quite a few global IPS like from the Universal studios; Fast and Furious, Jurassic and Game Of Thrones. Game Of Thrones has been one of our biggest success stories for sure. So yes, we’ve been there and done that.”

Panelists acknowledged that there is a need for organising and combating the problem of piracy.

The following session was a masterclass on Comic Art & Writing by Wacom senior director Rajiv Malik on Creativity in Online Education. Explaining the background of Wacom, Malik shared, “Wacom is a Japanese brand. And we are a small team in India who works closely with the artists to empower them with our tools. Our community site crossed 100K followers and we are trying to create regional community in India. We have got excellent response.”

The next session was Forever Young hosted by FICCI chairman of AVGC Forum and Punnaryug Artvision founder Ashish Kulkarni with panellist Tinkle editor-in-chief Kuriakose Vaisian, Press India managing editor (Children’s publishing division) and co-founder of The Bridge Richa Shah, Mayapuri Group CEO Shekhar Chopra, Diamond Comics advisor Bharat Gauba and Diamond Comics director Aanshul Verma. The panellist discussed various aspect like how challenging is to sustain solely on printed comic books in the digital age, and also to acquire new readers, how readers attention is going down. They also pour light that if the comic content is entertaining and eye grabbing enough it will earn good traction and profit. The eminent speakers also highlighted the fact that digital comics will be the way forward. 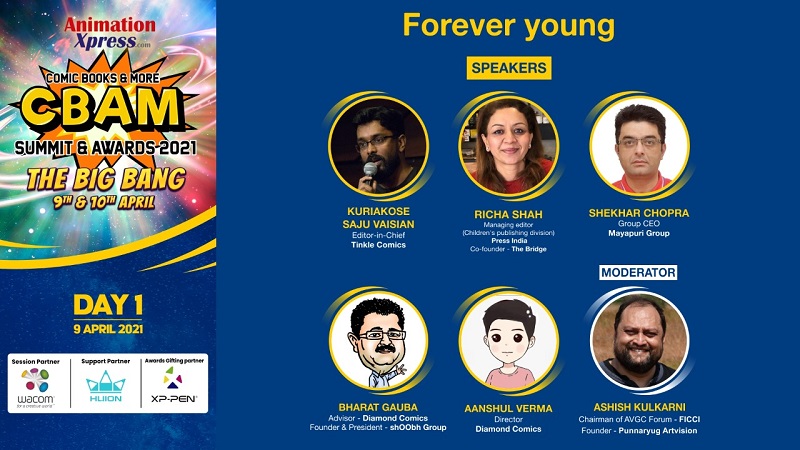 Our session No ‘kid’ding :It’s all about comics hosted by Parentune founder and CEO Nitin Pandey with panellist Pratima Ravindra Tawde, Sarah Mascarenhas, Shaurya  Makhijani, Jai Shah,  Rayyaan Shetty who are all school going kids. Pandey welcomes the kid with the surprise guest Baby Yoda plushy, and opened the floor for the kids to discuss on their favourite comic characters and share reasons why they like them. The panellists also discussed whether the comic way of learning good or bad, what a child could learn through comics, how a comics could push the imagination button in the kid , benefits and so on. 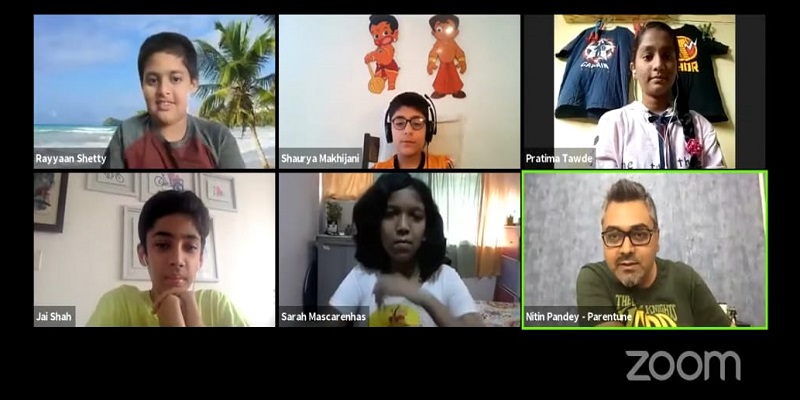 Our next panel was about Teaching the Comic way to discuss about how the teaching should be which was hosted by Pandey again with the distinctive panellist- Chitkara College of Education associate professor cum academic co-ordinator Dr. Parul Sood, Efundu Comics founder Vijay Srinivas Prativadi, psychologist and counsellor Kumkum  Jagadish, Jasudben M L School and Bloomingdales Pre Primary School educationist and principal Damayanti  Bhattacharya and The Danceworx assistant artistic director and HOD Jaison Mathew. The panellist discussed how they can incorporate comics in teaching, what will be opportunites, challenges, how comics help in building attention driven concentration level in children and even pave the way we think in future as an individual. 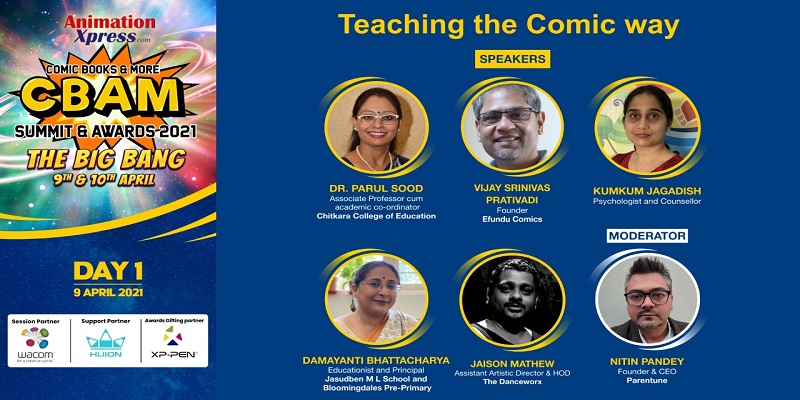 In the Digital Publishers and Distributors panel, Pratilipi co-founder/CEO Ranjeet Pratap Singh, Amar Chitra Katha head of digital strategy Deepesh Kothari, Global Comix director of business development Eric Tapper and River Comics CEO J M Thakar discussed the paradigm shift from comic books to mobile screens and tablets in conversation with Abhijeet Kini. They further noted how this platform can be leveraged to further grow the comic book industry and in fact revive the fiscal and traditional industry. The pandemic has impacted the transition in major levels – in generating revenues, in more sales (through subs) and other aspects.

It’s not the end yet as CBAM Summit will be back tomorrow with a slate of exciting sessions! 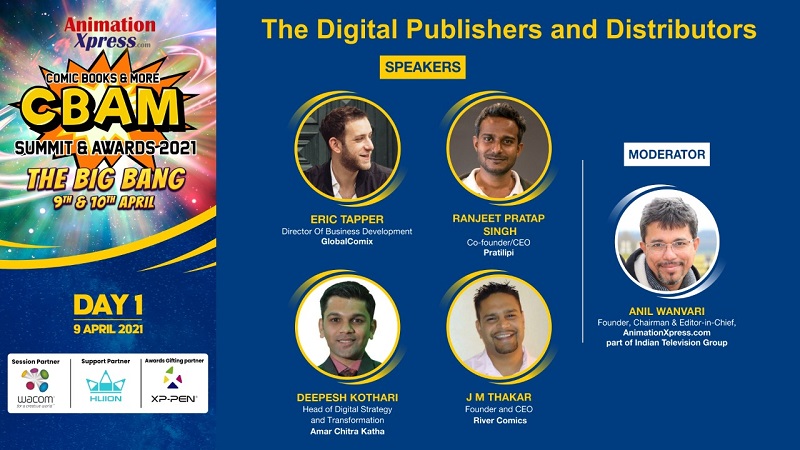