DQE  and SMC Entertainment Group, leading North American licensing agent and rights owner for The Jungle Book for North America, have announced that the popular, animated The Jungle Book TV series has joined Univision Network’s “Planeta U” children’s programming block this month. Twenty-six half-hour episodes will be seen in rotation in Spanish only. The Jungle Book is currently available in English in the United States at Redbox locations and on Netflix, Amazon Instant Video, iTunes, VUDU, and Hulu. Univision Network is the country’s most-watched Spanish-language broadcast television network, reaching 96% of U.S. Hispanic households. Univision’s Planeta U (“Planet U”) is a three hour block of children’s programming that airs on Saturday  mornings featuring cartoons that promote literacy, reading, problem-solving skills, respect for others, self-esteem, and pride in the Hispanic culture. The Jungle Book series will air at 9 a.m. after The Backyardigans at 8:30 a.m. and before Maya and Miguel at 9:30 am. 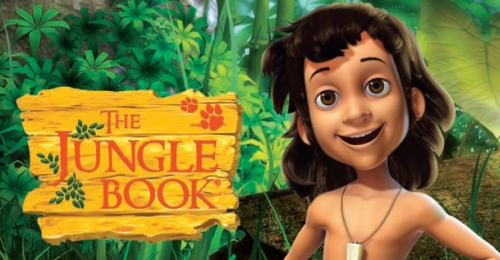 “The Jungle Book TV series, inspired by the classic story of Rudyard Kipling, is a great addition to our ‘Planeta U’ children’s programming block and builds on our commitment to inform and entertain our audiences,” said Alberto Ciruana, president, programming and content, Univision Networks. “We hope the series brings joy to our audiences in the U.S, as the enduring classic tale has done around the world.”

True to Kipling’s original fables and characters’ sensibilities, The Jungle Book TV series features tales of wit, friendship, courage and loyalty with the man-cub Mowgli, his friends Baloo the wise bear, Bagheera the black panther and the mighty Kaa, a rock python, set in the dense jungles of India where Mowgli’s enemy, the royal tiger Sher Khan, rules. Tapaas Chakravarti, the Chairman & CEO of DQ Entertainment Group, commented, “The deal has great strategic significance as this validates DQ’s constant pursuit to reach diverse audiences and markets. We are delighted that Univision will be showcasing The Jungle Book on its Planeta U programming block for children. The 3D series has already become hugely popular in countries where it has started airing. We remain hugely optimistic that the popularity of this iconic property will only gain further momentum in future.” The Jungle Book is a very active brand in the U.S. A second DVD “The Jungle Book – Return 2 The Jungle” releases in September, 2013, with a follow-up DVD in November. The Jungle Book now has free mobile gaming apps as well. connect@animationxpress.com