Sonic brings to its v

iewers, a whole new world of action, adventure and excitement with the popular Manga series – Idaten Jump. The show will pump up the adrenaline in you as the little Sho Yamato, along with his friends, shows his love for mountain biking in this new show starting  20th January, 2014, Mon-Fri at 6:30 pm. 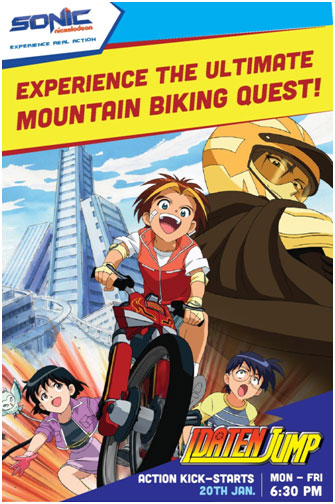 The storyline of Idaten Jump revolves around a young boy Sho Yamato and his love for mountain biking. As the story proceeds further,he is then transported to another world – ‘X-Zone’ and is challenged to a race by a group called Shark Tooth. In order to make his way back home, he must collect ten golden emblems by winning all the Idaten Battles. Sho Yamato battles it out at various courses including volcanoes, ghost towns, ancient ruins, snow-topped mountains, deserts and more.