Animation Feature Film
When it comes to creating animated characters and stories that connect and become favourites with Indian audiences, he is arguably India’s best. When it comes to storytelling full of humour, timing and punchy performances, again he is amongst India’s best. The creator of Simpoo, Birthday Bhoot, Ooga Booga, BulaDi, ChulBuli, Amaron battery TVC campaign, Vodafone Parrot and several other super popular animated characters, ‘Vaibhav Kumaresh’ is possessed, manically obsessed and driven possibly by the devil himself. Every time he creates a character, it becomes an instant hit! With kids, with youth, with grown-ups and in the process making terms such as age groups and gender groups meaningless. His content appeals and connects with all of the Indian audiences! (His films have also wowed audiences in Malaysia, China and conferences and festivals whichever part of the globe they have been shown in. But that’s for sharing in another piece)

Having explored the TVC and Interstitial space completely, making one popular character after another for more than a decade now, Vaibhav Studios for the past one year has been working on its dream project ‘Return of the Jungle’ a NexGen CGI feature of 90 minutes which is made up of 3 x 30 mins stories titled Josh, Dosti, aur Taqaat. 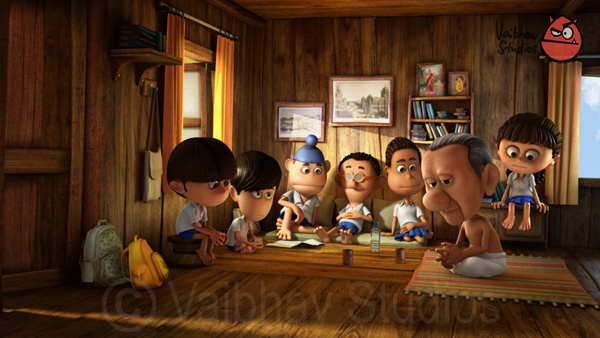 A still from Vaibhav Studio’s Return of the Jungle