Please share with us what your experience has been with airing Indian animated content, in terms of ratings, audience feedback and word of mouth.
Cartoon Network has been the home for some outstanding Indian animation productions. These have resulted in growth of viewership; in fact our research indicates that kids and parents alike view and enjoy these properties. All the Indian productions we have aired so far on Cartoon Network have done extremely well and their performance is comparable to any other programme on the channel. What is important to note is that the shows rate well and receive the same enthusiastic response even on repeat telecasts. This really speaks a lot for the appeal that Indian shows hold for the children here. In fact, Ramayan – The Legend of Prince Ram and Krishna: The Birth were the highest rated features across all channels amongst kids during Diwali and Janamashtmi! Other shows like The Adventures of Tenali Raman, The Adventures of Chhota Birbal and features like Vikram Betaal show ratings that are as high, if not higher than those of their international counterparts like Tom & Jerry, Beyblade or Pokemon. 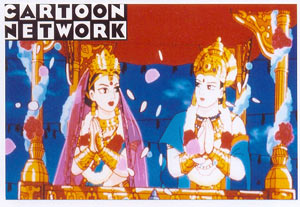 What’s the new strategy all about?
SNAPTOONS (Short New Asia Pacific Cartoons) is a unique pan-asian initiative which takes Cartoon Network’s commitment to nurture home-grown creative talent to a new level. Through this initiative, the Network is looking to invest in funding, backing and developing a new, original and groundbreaking idea that lends itself well to animation, is targeted to kids and either has a universal or regional appeal. SNAPTOONS is a serious, ongoing initiative designed to connect, discover and nurture creative brilliance that exists throughout Asia and will showcase the enormous potential that abounds in the region. This initiative will forge a relationship between the talent and Cartoon Network’s extensive global production infrastructure to help develop the next generation of ground breaking animation.

As part of this programme, Cartoon Network is inviting all Indians – poets, artists, amateurs, professionals, students, individual animators, animation studios, even the person next door – to send in their pitches and see their creation come to life and hopefully become the next big sensation. Out of the total pitches received, ten will be green-lit and each will be developed into full pilot episodes. The commissioned ten will then have their world premiere exclusively on Cartoon Network across the Asia Pacific feeds! The entry is open to all inspired and inventive people residing in India. The broad parameters that creators could keep in mind while developing the concept would be to ensure that their concept is kid related, is character driven with a good dose of comic-action. Additionally, in terms of design and creative vision – it should be fun, funny, fearless and importantly, should have the potential to be commissioned as full series or a feature film!

How many Indian animated shows have you acquired in the past 12 months and how many do you plan to do so in the coming year ?
Cartoon Network has acquired and aired twelve locally produced animation shows/features in the past five years and all of them have done extremely well with our audiences here.

In the past one year, Cartoon Network aired four Indian animations – Akbar & Birbal, a 13-part series; Son of Alladin; The legend of Buddha and Krishna: The Birth.

‘Krishna: The Birth’ is part of a four-part series acquired by Cartoon Network, detailing the life of Lord Vishnu as Krishna on Earth. The other three parts of Krishna would cover the Krishna’s Childhood, Krishna’s Teenage, and Krishna killing Kansa.

Any plans of co producing any of these shows?
We do not want to rule out any possible options in exploring various animation avenues be it co producing or even solely producing shows or even movies for theatrical releases in India. At this stage we have just achieved another milestone with the launch of SNAPTOONS. We are planning to not only fund but develop the winner’s idea completely from start to finish. As far as co- production is concerned, there is no concrete plan as of now, but we are constantly re-inventing and evaluating ourselves and will continue to do the same.

Your message for our Indian content developer readers
Indian animation is of very good quality and that is one reason we have acquired so many Indian productions. That is also the reason why India is becoming a hub for outsourcing animation work from other countries. I am happy that Cartoon Network has and continues to play an important part in popularizing this form of entertainment among Indian kids and families.

As mentioned earlier, Cartoon Network has announced an original content development initiative titled SNAPTOONS (Short New Asia Pacific Cartoons). India being a priority market for Cartoon Network in the region and one of the largest as well in terms of both revenues and distribution becomes the natural choice to what I would term as the most historic and landmark initiative in the recent history of Cartoon Network.

I do believe that India has the talent and a vast reservoir of content to dip into for inspiration. And I am looking forward to seeing Indian artists participate in this contest in real big numbers.

Your views on the mythology vs the contemporary debate.
Cartoon Network and POGO has always looked at entertaining children and families alike with ‘best in class’ programming, be it classic shows or acquired shows from the International Market and original productions from animation studios and production houses in India. Cartoon Network and POGO have been the pioneers in consistently pushing the envelope when it comes to showcasing and developing Indian content for Indian audiences. Be it contemporary productions like M.A.D (Music, Art & Dance) or Bam! Bam! Bam!….Gir Pade Hum or even the biggest awards show for kids, POGO Amazing Kids Awards on POGO or conventional Indian properties like Ramayan The Legend Of Prince Ram, Vikram Betaal, Akbar Birbal, Legend Of Buddha, Son Of Alladin or Krishna The Birth on Cartoon Network. In our experience, balanced programming that has a mix of conventional/historical/traditional and contemporary shows, and quality entertainment drives viewership.

At Cartoon Network and POGO, we have had great success with the internationally acquired and produced content like Tom & Jerry, Richie Rich, Scooby Doo, Takeshi’s Castle, The Powerpuff Girls, Dexter, Beyblade, Pokemon, as well as our locally acquired productions as well original productions like, MAD, Bam! Bam! Bam!….Gir Pade Hum, Legend of Prince Ram, Adventures Of Tenali Raman – all examples of quality content being popular.

The challenge is in producing and acquiring shows that appeal to Indian kids. Therefore, we feel that the key lies in choosing the right content, be it mythological or modern, which is then intelligently programmed and that makes all the difference.

A little insight into how Cartoon Network broadcasting division works in tandem with the Consumer products division how does a producer benefit by getting to be on your platform?
As the number one kids’ channel in India for over a decade, Cartoon Network is more than just a TV channel – we are a diverse kids’ entertainment and lifestyle brand – offering a wholesome brand experience to its consumers, advertisers as well as distributors. Also, since the Network characters enjoy an iconic status amongst Indian kids, it is our mission to extend the magic of cartoons beyond the confines of the television set and licensing and merchandising helps us in doing just that.

Cartoon Network, like in most other trends in the kids’ space, was the first channel in India to actually offer a 360-degree approach that the Network prides itself of – and this is possible via Licensing. For example, a client can buy a program like The Powerpuff Girls on-air, take it on ground via an event, put it on a pack to meet their marketing objectives and mirror the same online via www.cartoonnetworkindia.com.

Licensing has also greatly helped to get onboard some extremely important, new categories that have also enhanced Cartoon Network’s non-traditional client portfolio.

Over the last five years, Cartoon Network’s Toons have signed over 50 deals promoting both traditional as well as non-traditional brands. Encouragingly, most of the promotional licensing clients that we have are repeat clients. Some of our the clients include BPCL, Citibank, Red Label, Kodak, Surf, ING Vyasa, Citibank, ICICI, Britannia, Cadbury, Kwality Walls, Dabur Real, Fanta, Parle, Fritolay, Kissan Jams, GM Pens (Reynolds), to name a few.

Last year, we launched consumer products and have recently embarked on third party licensing with the hugely popular property, Beyblade and also announced our foray into Theme Parks.

New platforms and content delivery options such as Video On Demand, Pay Per View, IPTV, Mobile, etc, what’s the Cartoon Network ASIA PAC & Indian sub continent strategy for the same.
New technology is certainly a burgeoning market for content providers and not only offers a new revenue stream but is also a great marketing tool for the sampling of our channel via a very tangible and sensory means. New technology also provides multiple touch points and new platforms for Cartoon Network to extend its brand. For example, live streaming of a four-hour Cartoon Network block is available in Hong Kong, Malaysia and Australia via mobile telephone carriers. However, as important as new technology is, Cartoon Network stands by its mandate of providing the best quality animated entertainment for our viewers throughout the world. From our stable of much loved cartoons, we look at how they fit into the new possibilities that these new technologies hold.

In Australia, Cartoon Network currently has a number of agreements with the large mobile phone companies such as Vodafone, Telstra and 3 networks where users are able to download clips of cartoons or subscribe to watch streaming video. In addition, Cartoon Network was the first kids’ network to offer interactive character-based games on the FOXTEL games channel. The games are updated each month and this provides another platform for kids to interact with Cartoon Network and our characters outside of the traditional TV channel environment.

In India, Cartoon Network, recently,inked its first video on demand (VOD) deal in the country with VSNL. The agreement will enable Tata Indicom Broadband subscribers to watch their favourite Cartoon Network toons on their PC with just a click of a button. Tata Indicom Broadband will offer subscribers as much as 40 episodes each of some of Cartoon Network’s most popular and iconic toon stars including Johnny Bravo, The Powerpuff Girls, Dexter’s Laboratory, Ed, Edd n Eddy, Courage -the Cowardly Dog, Camp Lazlo, Code Name Kids Next Door, Samurai Jack, etc. The content, available in both Hindi and English, will be available in over 48 cities across India including all metros such as Delhi, Mumbai, Bangalore, Hyderabad, Ahmedabad, and Kolkata amongst others. All of these areas will become even more important going forward as ‘convergence’ becomes a reality, and our core audience of kids and young adults – as well as advertisers – come to expect our unique properties and characters to be available on all platforms and at all times.