The session lasted for 75 minutes. Its impact will last much longer. For the several international animation businesses that attended the panel session on Indian animation, as well as for those who will hear about it from word of mouth as well as all those who‘ll read about it across media, the message was loud and clear.

… Fresh programming for global and Indian audiences, co productions, finance, infrastructure, high quality CGI, talent pool, entrepreneurship, innovation, competitive and strategic advantages but no planking on low cost….. The topics and buzzwords focused upon by the speakers gave a clear indication of how India was moving up the value chain in the animation business even as it has consolidated its production services business

DQ Entertainment‘s Tapas Chakravarti gave a comprehensive industry overview. Amongst the most interesting points, he stuck the point that a lot of mainstream entertainment companies had entered Indian animation and that there were several players who could be mature partners with the muscle and wherewithal to partner as equals.

Speaking for Indian IP creators, Graphiti‘s Munjal Shroff spoke about various properties under development in India and then shared some beautiful slides from Graphiti‘s shows. Munjal remarked that while IP creation had taken off in India, the next logical challenge was to find global distribution.
DQ Entertainment‘s Tapas Chakravarti 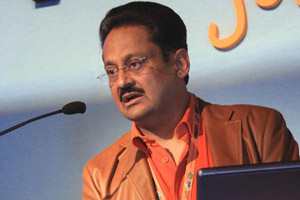 Talking about the Indian talent pool, Anirights‘ Ashish Kulkarni gave the International audience an insight into the human resource scenario in India and how it has evolved over the past years. He also touched upon the unique point that unlike most countries that are animation destinations, Animation in India is not restricted to one particular region or city and is growing in several cities and hubs simultaneously, increasing the overall base of studios and talent.

Kahani World‘s Biren Ghose spoke about how India was no longer just about the low cost plank, but about creative collaborations and strategic advantages as well. He also shared with the audience that a lot of Indian themed content was ideal to travel to the West and would be fresh, clutter breaking programming. He also spoke about processes and best practices that were being increasingly inducted into the Indian production studios.

Animation Dimensions‘ Elizabeth Koshy shared that family values are the same across the globe irrespective of language, countries and economic status. She pointed out that Indian culture propagates moral values and family bonding and animation imparts these values to children in their early formative years making it a fantastic combination.

On being asked by moderator Anand Gurnani about benefits that International studios could accrue by involving with Indian animation, the panelists opined that there were several advantages including its proximity to the Indian IT industry and its success, Bollywood and the culture of story telling, processes, the vast Indian treasure trove of mythology based stories, the great Indian talent pool, the quality and on time factor etc…

Questions to the panelists drew some interesting answers. On being asked whether he foresaw consolidation and eventually specialization, Ashish Kulkarni shared “Consolidation is already happening and though there is all round development, India is renowned as a hub for CG creation.”

Answering a question on how it was to creatively collaborate with renowned geniuses like Fido Dido creator Joanna Ferone and Lisa Goldman, Graphiti‘s Munjal Shroff remarked, “It has been an inspiring experience. The themes are universal and yet there is a lot of uniqueness and rich local touch in terms of art and treatment.” He also pointed out that Graphiti was amongst the first studios in the country to co produce a show with Nickelodeon.

Tapaas Chakravarti on being asked about win-win partnerships with International companies, shared, â€?Indian animation is not just about investing some money and infrastructure, we have invested our blood and soul. At DQ there are more than 20 projects on simultaneously and there are several companies that work with us repeatedly. Creativity, Quality, Delivery and Scale are all important aspects and are key areas to focus upon.â€?

Several Q&As and audience interactions later, even as the session ended, the panel conveyed that there was a lot that could be gained by International studios if they added an Indian edge to their global strategies. “I request you, on behalf of all my fellow panelists, that please come and visit India and see for yourself the kind of growth that the industry is making and how it can be of benefit to you,” concluded Kulkarni.

The message is resonating loud and clear, Indian animation is entering top gear!