Pixar has unveiled yet another new image for its upcoming animated feature, Luca.

Helmed by Enrico Casarosa, Luca is set in the Italian Riviera which is expected to give animators a chance to explore and play with visuals for Italy, similar to what Ratatouille did for Paris. 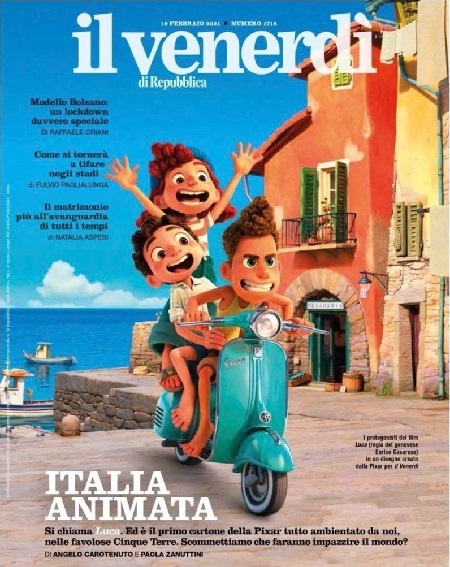 The new promotional still which the Disney owned studio released today, features three main characters and one of the scenic backdrops from the film, on the cover of Il Venerdì di Repubblica, an Italian magazine, that attracted attention via a tweet from Discussing Film. However, any news featured on the magazine about Luca hasn’t been translated and ported over yet.

Earlier Casarosa revealed that Luca will blend elements of his life growing up in Genoa with The Little Mermaid and the works of legendary filmmaker Hayao Miyazaki. The animated film tells the story of a young boy and his friend who appear completely human and normal when they’re out of the water, but they are really mysterious sea creatures. Their lives begin to change when they befriend a young girl on the surface.

“Luca is a deeply personal story for me, not only because it’s set on the Italian Riviera where I grew up, but because at the core of this film is a celebration of friendship. Childhood friendships often set the course of who we want to become and it is those bonds that are at the heart of our story in Luca. So in addition to the beauty and charm of the Italian seaside, our film will feature an unforgettable summer adventure that will fundamentally change Luca,” Casarosa expressed in a statement during the announcement last year.

A teaser or trailer for Luca is yet to be revealed yet. Luca is slated to release in theaters on 18 June.