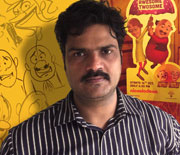 Interacting with AnimationXpress.com, Suhas Kadav, Director, VIR – The Robot Boy, reveals several aspects that went into the making of this 26 Episodic Series.

What is VIR- The Robot Boy all about? The Storyline of ‘VIR The Robot Boy’ revolves around the character of VIR -A robot having a strong emotion quotient and empathy factor, created by Scientist Dr Prem Sahay.

As the story progresses, the scientist gets to know that the Defense department was planning to induct his robot for military purposes , he escaped with it to India . Dr. Prem further modified the Robot and gave it the form of a kid and named it VIR! 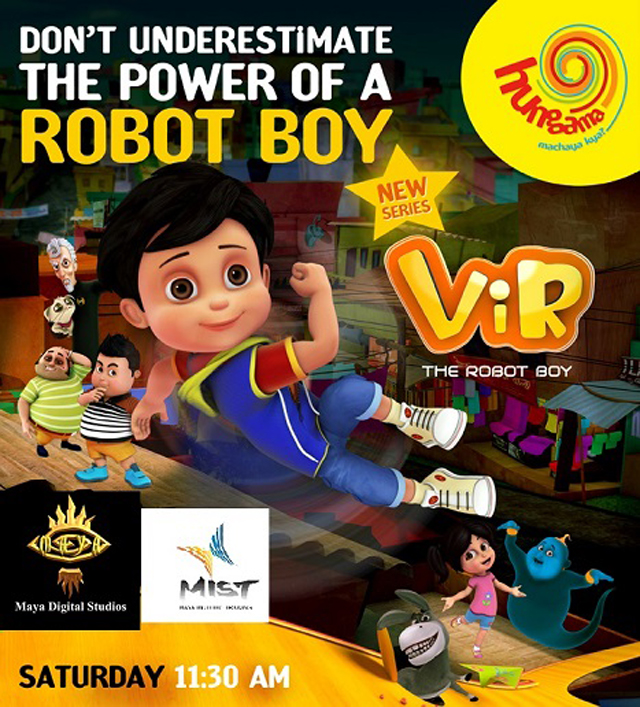 Each episode has a stand-alone story, wherein VIR along with his friends Gintu-the Jinn, Chulbul-the donkey and Imli-his class mate, unravel the mysteries and fight their way out from everyday troubles. Bunty- VIR’s classmate, along with his associates Keki & Feki keeps trying to unfold the mystery of robot boy. But VIR always happens to evade this situation in a funny way and wittily. In several intervals, Mad Max, the villain, tries all possible ways to acquire the possession of this highly desired robot boy, VIR

What inspired you to make this Episodic Series? There are several inspirations that went into the creation of this episodic series:

Firstly, I grew up watching shows like He-Man, DiDi’s Comedy show, Giant Robot etc and was fascinated by animation world. I was more inclined towards comedy-adventure genre and always dreamt of creating one someday. And this dream was fulfilled with the creation of this robotic character- VIR, which helped me develop a robot with humanistic qualities.

Secondly, we were looking at creating not just an Animation series but also at developing a brand that will stay with kids. As the storyline of VIR – the Robot Boy moves the focus of the audience from a mythological superhero to a scientific superhero with humanistic qualities and relate themselves to the character and enjoy the heroics.

How does the Character of VIR ‘stand-out’ from other Super Heroes?

VIR is a robot with human like qualities and a unique blend of emotions and superhuman abilities. VIR is naughty yet intelligent, funny yet compassionate, playful yet helpful and street smart yet has a golden heart, all of which define the kids of today. This series follows his humorous escapades as he manages to save his friends from problems, with the help of his  quick thinking power and a wide array of robotic abilities.

How many Animated characters does the episodic series include?

VIR, being the lead character, there are 70 secondary characters in the series. As we progress and develop the series, we will add more characters per episode depending on the progress of the storyline.

Can you put light on the look and feel of this Episodic Series?

We created the characters/props in simple forms and tried to stick to the basic objects that kids use in their drawings or everyday life. So the Idea was simplicity and colourful themes. We also used multiple colours in order to move the focus of our audiences towards Indian midtown cities. The background colours and characters  in each of these episodes have a  painted look and feel. We also added colourful Props, which added the beauty and essence to the animated characters and the environment created around the story.

The technical challenges faced by your team?

Well, Pre-production was the most challenging part as we wanted the element of simplicity in the series. To deliver a perfect human looking robot, our team conducted several good quality checks in pre and production stages to minimize the post production hick-ups.

Which episode of ‘VIR’ increased the TRP of the series? The first episode in fact achieved a TRP of 1.3 which was the highest for a new show launch in 2013! While the third episode had a TVT of 350 beating Chotta Bheem and Tarak Mehta ka Ulta Chasma in the same slot! I hope we have better TRP’s for the show overall!

Who were the animation artists involved in the making of VIR – The Robot Boy? I am really thankful to Ketan Mehta for giving me complete liberty and support in terms of concept development. His film making experience and guidance at every stage of the development of the series was really an advantage. The series was not complete unless he finally wrote really catchy title song of VIR- The Robot Boy.

This series was also possible due to the hard work of several animation artists like Niraj Vikram, who was responsible for the screenplay and dialogues, Tarit Nath for modeling and texturing, Rajesh Mahimkar and Sachin Jadhav– the Pre- production Supervisors, Akhilesh Sharma and Abhijeet Gupta- rigging supervisor,Ashutosh V  Kushe and Ranjeet Kumar-lighting supervisors, Ramesh Mense- VFX supervisor, Dheeraj Berry- the creative producer and  Argha Banerjee who sang the title song.