Aarya revolves around her journey through life and the decisions she takes as a mother, when the family’s business falls upon her shoulders. Commenting on the inspiration for Aarya, director Ram Madhvani said, “The Bhagavad Gita is one of the reasons behind the making of Aarya. It is the value system of where Aarya stands and what helps us through life. ‘Karma’ and ‘Dharma’ are concepts and ways of living that we are dealing with everyday. Aarya faces them too, throughout the show and her dilemmas are shown through some of the philosophies of the Bhagavad Gita.”

In the recently released animated reimagined video, actor Sharad Kelkar narrates the story of Aarya as a true warrior caught in the biggest dilemma of her life. The music has been composed by Dhruv Ghanekar. There Aarya is seen to be rising beyond her shortcomings and challenges that life throws at her to protect her children.

Sen exclaimed, “Aarya has reaffirmed my belief that being a mother is all about being a warrior and protecting your family by all means. Aarya carries so much pain, but she internalises it all, to fight and save her children against all odds. This reimagined animated video truly brings out the best of Aarya and highlights her journey from being a mother to a warrior.” 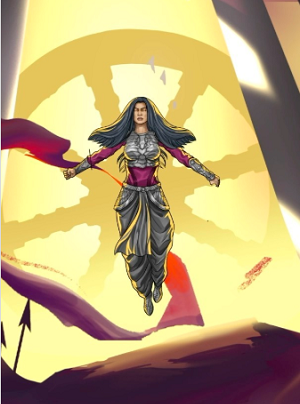 Kelkar further added, “Lending my voice to bring alive a creative vision is always a big win for me! Having heard so much about Aarya, it would have been a shame to not be a part of the show in some form. The way the story flows, one can literally feel Aarya’s burden of making choices. When I was narrating this piece, it almost took my back to my time working on movies like Baahubali – the grandeur and intensity of the narrative. The delivery in this was to be just as powerful and I wanted to make sure I made the same kind of impact with the viewer. This video is going to inspire the warrior within everyone!”

Helmed by Madhvani, Aarya depicts Sen’s character being reluctant to be involved in the illegal narcotics family business and her life is suddenly turned upside down with an incident and her family is threatened. In the quest to protect them, she is forced to become the very person she always avoided. She realises that to protect her family from criminals, she herself needs to become one!