Green Gold Animation developed ‘Chhota Bheem: Mayanagri’ will be premiering on POGO on Wednesday, October 26, 2011 at 12 noon. Catch kids’ favourite, Indian superhero – Bheem, with Krishna and all his friends as they embark on exciting new adventures this festive season! 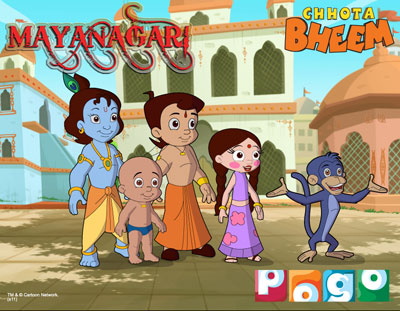 Maayandri, a demoness, will do anything to resurrect her brother, Kirmanda, from the dead! Even if it means capturing Krishna and forcing him to perform the act. Krishna, who falls prey to Maayandri’s devious plot, sends a distress call for help to Bheem. Although Bheem and his friends rush to Krishna‘s rescue, the demoness succeeds in capturing Bheem as well! Tune-in to this new, action-packed movie – Chhota Bheem: Mayanagri, to find out if the two heroes manage to save the Earth and foil Maayandri’s attempt to bring Kirmanda back.

Monica Tata, General Manager, Entertainment Networks, South Asia, Turner International India, said, “Known as the ‘Festival of Lights’, Diwali not only adds brightness to the glittering clay lamps and fireworks but also brings the entire family together in joyous festivities. Chhota Bheem is adored by both, kids and adults. By premiering Chhota Bheem: Mayanagri on Diwali, we hope to bring together the entire family and celebrate excitement, friendship, loyalty and quality entertainment with Chhota Bheem and POGO.”

Watch Chhota Bheem: Mayanagri on October 26, 2011 at 12 noon and thereafter, back-to-back Chhota Bheem episodes throughout the day. The Diwali countdown begins for loads of fun, entertainment and laughter only on POGO.

Chhota Bheem is the most popular animated character with POGO being the no. 1 kids channel in India (Week 42 ending Oct 15, 2011)