DQE has announced the signing of a co-production agreement with Formula Fun Entertainment Limited (“FFE”) in the UK and Telegael in Ireland to co-produce a new CGI (computer-generated imagery) animated pre-school series based on the award-winning property, “Franco and Formula Fun”. The series is expected to be available for broadcast in early 2013. 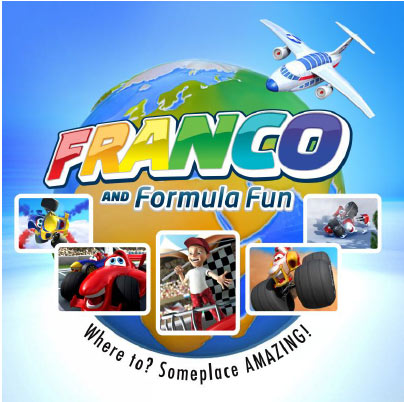 Franco and Formula Fun won the 2009 MIP Junior Licensing award and the TV series has been pre-sold into 28 countries worldwide through broadcast partners including: TV2 (Norway), MTV OY (Finland), Al Jazeera Children?s Channel (Middle East), Israel (Hop! TV) and Iceland (CH2). The series is aimed at 3-7 year olds and comprises 52 episodes of 11 minutes each. FFE and Telegael will oversee pre-production, with animation production taking place at DQE’s studios in India and post-production at Telegael in Ireland.

Inspired by the global motor racing sport, this series sees six-year-old Franco‘s adventures with his ten superpower toy racing car friends, both on and off the racing track, come to life in a CGI racing world.

Tapaas Chakravarti Chairman & CEO of DQE said, “With India making its Formula 1 circuit debut in October, this animated series makes perfect sense for us. We are extremely excited to work on this action packed TV series alongside Formula Fun Entertainment in the UK and Telegael in Ireland. We are sure that children throughout the world will delight in watching their favourite super cars come to life on TV.”

Marina Nicholas, Creator and CEO of FFE said, “FFE is delighted to work with two prestigious production companies to produce this animated television series. Their wealth of experience in high quality productions makes Telegael and DQ Entertainment ideal partners to deliver a global series, which combines entertainment, education and sport to the younger generation.’

Paul Cummins, CEO Telegael, Ireland said “Telegael is delighted to partner with Formula Fun Entertainment and DQ Entertainment to bring this award-winning property to a worldwide children’s audience. The combination of compelling characters, exciting storylines and colourful locations set the tone for a series that will wow children the world over.”