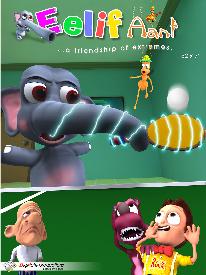 At MIPCOM this year three Indian studios… Greengold, Graphiti and Dessin Works were pitching their original content to international buyers and now at ATF there’s Digimate productions. The Delhi based studio is here at Singapore to try and do some pre sales for its currently under production original 3D gags based show Eelif Aant.

Close to 30 artists are working with Digimate and 2 episodes of the 52 x 7 TV series are ready with the third in post production.

Speaking to Animation ‘xpress, Digimate Productions’ Somesh Paliwal commented,”We are really thrilled to be at ATF and are encouraged by the interest and response by some of the Asian broadcasters. We have just recently begun production and are trying to build our profile as well as try and generate some pre sales for our series.”

“The pre production for the show has been going on since six months and we are proud of the fact that the entire show from concept to creation including voices is being done at New Delhi.” he added.

Eelif Aant is the story of Eelif the elephant and Aant the ant. One interesting feature about Eelif is that he has a magical trunk that can do anything. Sometimes the trunk is in Eelif’s control while some times it isn’t and there’s a lot of adventures when it gets out of control. Amongst Negative characters in this Gag Fest are Snooty and hsi sidekick Sniver the Wolf. The creative team at Digimate is headed by Rahul Singh.

Earlier this year Digimate which has done a lot of promos and finishing work for regional TV shows completed concept to screen animation work on a UK based direct to DVD on Sikhism.