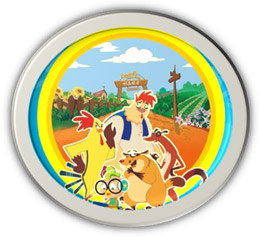 Nickelodeon launches yet another show filled with an ever-popular theme, eternal chase and a zany spin that showcases the most enduring struggle in animal history – Chicken versus Weasel!

The new animated series – Chicken Stew gives viewers a peek at the exploits of 3 independent-minded chickens that set out to travel the world in search of adventure and to escape the continuous threat of being captured by 2 dastardly weasels on their trail! This exciting journey of the chicken begins from, Monday, September 26, 2011 at 4.00 pm, exclusively on Nickelodeon.

Chicken Stew is a colourful and fast paced 2D animated series that targets children between the ages of 5 – 10 years and features the struggle of the three chickens – Small Fry, Uncle Wattles and Free Range who fight the battle with the dim-yet-determined weasel brothers – Slim and Glutton. The chickens are constantly cautious of the 2 sneaky weasels who are always in pursuit of a hot chicken dinner! The series holds strong themes of friendship, togetherness and unity amongst the clan which always sees the poultry gang triumph over evil!

So catch the classic struggle, as the hunt for the Funny Farm trio forces Slim and Glutton from the junkyard to the far reaches of the planet. From South America‘s jungles to the African dessert, the trio defiantly knows how to use their cleverness and “pluck” to win over wily weasels.