BRB Internacional and Foo Entertainment have signed an agreement for the worldwide distribution of the animated series, Miss Bellyfoo.

The 3D animated series was conceived and created by Foo Entertainment president and creative director Chris Djuritschek. Miss Bellyfoo consists of 26 episodes of 26 minutes, and is aimed at children between three to nine years old. Famous Hollywood award-winning script writer, Jeffrey Scott will carry out the development of the scripts for the first season. 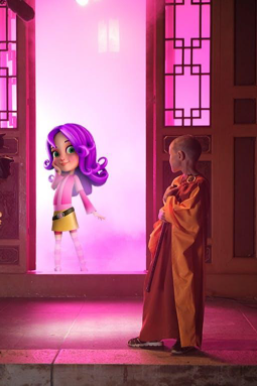 Miss Bellyfoo is like no other TV Series. For the first time in history, Miss Bellyfoo TV Series has collided fantasy with reality! It’s every child’s dream to join forces with their idols in defeating the evil Mastermoll who’s ought to destroy Daba Diba Duba Land and music that energises their universe. Miss Bellyfoo encourages children to believe in their talents and to never give up on themselves, even during the times of failure.

A world full of music. A magical place full of wonders and adventure. Welcome to Daba Diba Duba Land, the land of music, dance and melodies! Accompanied by our heroine Miss Bellyfoo on her adventurous path through the land of music, that with the support of her loyal friends and a crazy professor, is always fighting the evil Mastermoll and his wicked helpers, who only seek to achieve one goal: to rule over Daba Diba Duba Land.

The animated series intends to promote and encourage the kids all across the globe to have big and amazing visions and dreams, as well as talents. Self-confidence, motoric capabilities and creativity are very important later on in life. The kids are the real heroes in this show, the center of everything, no matter what skin color they have or which country they are from. Miss Bellyfoo showcases all types of music and talents from singing, dancing, or playing a traditional instrument from their own country! It’s a FOOtastic way to exemplify the power of music and how it can unite different cultures, and even save Miss Bellyfoo’s universe!