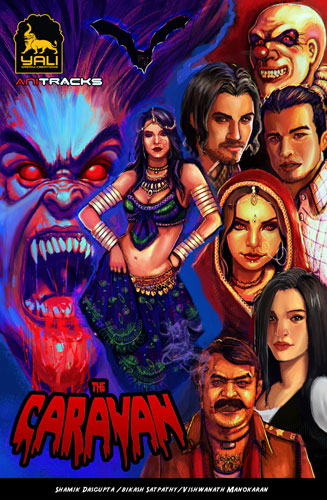 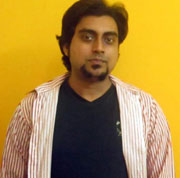 How would you describe ‘The Caravan’?
The Caravan is a classic horror/action/adventure in the trend of ‘From Dusk till Dawn’ and ’30 Days of Night’ copiously coated with spicy Bollywood masala.

For ages a coven of vampires travel the deserts of Rajasthan under the guise of a Caravan of Nautanki or a Gypsy Circus. They lure the unsuspecting villagers to invite them to perform and through the course of the night feed on every living soul. Their heinous deeds go undetected for years, possibly even centuries until a boy named Asif survives their attack.

Years later the boy grows up to be a smuggler across the border, and on a fateful day he gets arrested. Jai, the custodian cop and Asif get stranded in the desert and find shelter in a fort run by border  security force and their volatile and violent Officer in Charge, Daroga Bhairo Singh. As night creeps forth, the caravan of vampires appears once again on the horizon. Asif becomes terrified and tries to warn them but no one believes him. Instead, mesmerized by the glamour of the Nautanki, they make the fatal mistake of inviting them to the fort.

What follows is a night drenched in blood as the vampires begin their massacre. Asif had escaped the Caravan once, but can he pull off that impossible trick again?

And why did you settle for this story line for ‘The Caravan’?
It struck me hard that this story can be an excellent film pitch, and if you will see the story is told in bona-fide filmy style with complete three acts: The Dusk, The Night and The Dawn. Since I didn’t have any connection to the film industry I chose the medium I am most comfortable with and where I can call the shots to a certain degree, hence The Caravan came into being. I am quite happy with the way it shaped up and I am proud to present this to the readers and fans.

Have you solely written the entire book? What was the driving force behind you writing this book?
Yes the entire writing and art direction is mine, and since this was a passion project I went as far as drawing a couple of chapter covers for the book which received much fanfare, thanks to Yali who gave me this chance and the people who liked it. Frankly, there were no high flung ideas or philosophies behind this book. The idea of a Vampire Banjara Troupe in Rajasthan germinated in my mind in 2008 and from then I was trying to find a way to make it happen. Finally Yali Dream Creations stepped in and produced the book while Anitracks Media decided to publish it in India. The purpose of this book is to entertain, and if I can engage my readers continuously from the first page to the last I feel my motive has been fulfilled.

Could you put light on the time duration taken to complete ‘The Caravan’?
I started way back even before Yali Dream Creations came into picture. I wrote the synopsis and even made a couple of concept arts at that time. Unfortunately there were no immediate buyers for The Caravan at that point of time, but eventually the stars aligned and here we are releasing the book On June 1st at Bangalore Comic Con. The entire process of writing the script and making the artworks took around six months to complete. 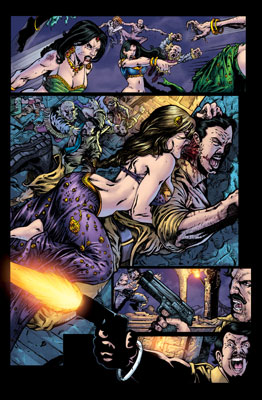 And how would you describe the look and feel of the book?
This is a single book, self contained in 82 odd pages. If we taste success with this, we might consider making a sequel of The Caravan. As I said before the look and feel of this book is completely Bollywood. In fact this is my ode to Bollywood, especially the films which revolve around the heartlands of India like Omkara, Saheb Biwi aur Gangster or plain and simple Dabangg, with a healthy dose of horror, action and comedy.

Your targeted audience for ‘The Caravan’ is?
Teens and above, there is gore and violence in the book and some of the vampires will give impressionable minds nightmares. In the introduction of the book eminent writer Samit Bashas given an apt description of the people who will love this story:

So whatever your level of engagement going into this – whether you’re a fan of old Bollywood horror movies, or of EC’s classic gorefest comics,  a general pop-culture geek, or you’ve just seen Khooni Dracula videos on YouTube and considered seeing the whole thing – you’re going to find something to enjoy here.’

We would like you to share the pricing and credit list of the book?
We are keeping the initial price of INR 200 for this full colored, 88 page prestige format Graphic Novel. Created and Written by Shamik Dasgupta, Artwork by Bikash Satpathy assisted by Shamik Dasgupta, Colors by Vishwanath Manokaran with assists by Yogesh Pugaonkar of Holy Cow Entertainment, Lettering done by Tazeen Shaikh, produced by Asvin Srivatsangam of Yali Dream Creations, Published by Sudeep Choudhari of Anitracks Media. Anitracks Media is publishing the book in India.

Writing is surely your chief passion.
Yes! It is JI am writing comic books and Graphic Novels from 2005, some of my works are Ramayan 3392 AD, Sadhu and Virulents published by Virgin Comics, Irith Published by Arkin Comics, Daksh, Yumi and Old School published by Level 10 entertainment and The Legends of Aveon 9 published by Rovolt Entertainment.

From where can a comic fan buy this book?
We are releasing the book at Bengaluru Comic Con 2013 and you can grab your fresh copy there. After that we will try to make it available through online vendors and finally through pan India distribution channels. I expect this book to be made into a movie sometime in the future, which was the primary purpose of this graphic novel.
connect@animationxpress.com