INDIA – the name evokes a lot many feelings and adjectives when it comes to describe this vibrant country. But what tops everything, is its cosmopolitan, diverse and secular nature. The country celebrated its 72nd Republic Day on 26 January 2021, which however, turned grim due to the violence at the capital amidst the ongoing nation-wide protests by the farmers against the Farm Laws.

As a response to this and a lot of other things going on in the country which has put a blot on India’s tolerant and secular nature, well-known independent animator and filmmaker Debjyoti Saha has created a thought provoking animated video, We-The People which has gone viral on social media. 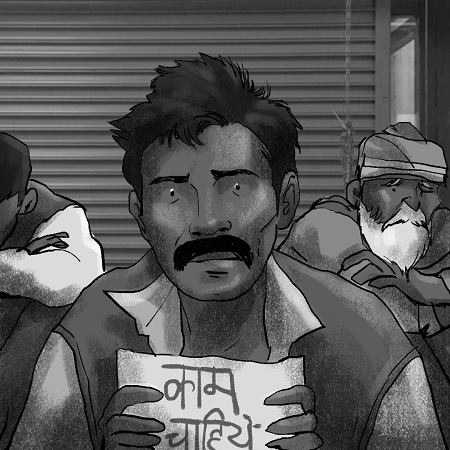 The one minute video finds the narrator (voiced by Saha himself) reading out the Preamble of the Indian Constitution while its images depict the stark realities that fit ironically with the motto of the constitution and the occasion.

“We-The People was made with respect to Republic Day, the day on which the Constitution of India came into effect in 1950, thus, truly turning the nation into a newly formed republic. As a passing thought, I recollected memories of our recent past and there was a striking difference between the present state of affairs and the words that were coined 72 years ago in the Constitution. This left me pondering upon an idea that eventually manifested into the video,” Saha told Animation Xpress.

The video leaves a lasting effect and haunts you with the voice rewinding in your head. Saha shared that stripping the video of colour and rendering it in black, whites and greys, made it visually and metaphorically bring out the difference between the word and image and focusing on only the crux of the narrative. It took him about two days to conceptualise and produce the video as it was “pretty simple and straightforward” to him, using Adobe Photoshop and After Effects entirely.

Commenting on how he crammed and ironically portrayed the major issues within such a short span of time, Saha added, “The Preamble of our Constitution is a one minute read and genuinely outlines what our country stands and should stand for. Glancing through the Preamble, a different picture would strike up against every word; almost involuntarily. It was only a matter of recognizing this relationship of word and image that gave meaning to the video.”

The voice-over also adds a different depth to the video with an instrumental rendition of Saare Jahan Se Accha by Pandit Hariprasad Chaurasia as the background score.

Speaking about how he wishes to inspire fellow artists to use this medium as a voice of rebellion and revolution, Saha noted, “Honestly, most of my work is spontaneous and a reaction to my environment, and things that make me uncomfortable. Everyone has their own free will to accept or deny my work/ message and speak for/against what they deem fit. As an artist, be it in whatever medium, I feel it is extremely important to voice your opinion on certain aspects of society because that, too, is a part of the documentation of our socio-political environment, and that is what, eventually defines us and our existence. Use your skill as a tool to carve your perspective and render your voice. Beauty is subjective and Art doesn’t always need to be ‘pretty’.”

“Art should comfort the afflicted and afflict the comfortable” and for the past couple of years, a number of incidents have wreaked havoc on the ‘soul’ of ‘India’, as the beauty of this country doesn’t only lie in its mountains, beaches, forests, culture and festivals – but in its people who advocate love, harmony, peace and humanity.

Here’s to a belief that my country will prioritise “humanity” more than “patriotism”, just how Tagore (read Thakur) envisioned it.